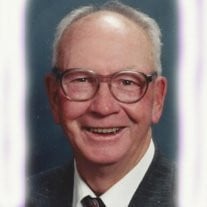 Clarkston – JESSE WILLIAM GODFREY, 87, passed away on December 24, 2013 at Williamsburg Retirement Center. He was born August 12, 1926 in Clarkston UT to Henry E. and Agnes Wheatley Godfrey. He grew up farming in Clarkston and served in the Navy from 1944-1946. He married Dorreen Sperry on October 20, 1947 in the Logan Temple, they had seven children together. Dorreen passed away August 29, 2013. Jesse was an active member of the Church of Jesus Christ of Latter Day Saints holding many church positions, including serving as a High Councilman for 12-15 years. Jesse and Dorreen served two LDS missions, one to Texas, and one serving in the Desert Industries.He is survived by two daughters, Bonnie (Gordon) Mendelkow of Providence, UT, Connie (Duffy) McFarland of Rexburg, ID, Four sons, Norman (Vicki) Godfrey of Hooper, UT, LaRon (Ann W) Godfrey of Clarkston, UT, Kim (Ann C) Godfrey of Clarkston, UT, Terry (Carrie)Godfrey of Smithfield, UT, one daughter-in-law, Liz Godfrey of Logan, UT, 29 Grand Children, and many Great Grand Children. Jesse was preceded in death by his Wife, Dorreen, one son, Wayne, one Granddaughter, and one great granddaughter.A viewing will be held on Friday December 27th from 6:00pm – 8:00pm in the Clarkston LDS Church, (25 East 100 South). The Funeral Service will be held Saturday, December 28th at 11:00am with a viewing prior from 9:30am to 10:40am in the Clarkston LDS Church. Burial will be in the Clarkston Cemetery following the service.Funeral Services under the direction of Cache Valley Mortuary, 3207 North Main, North Logan, UT, 435-787-8514. Condolences may be sent to the family at cvmortuary.com. In lieu of flowers, please make donations in his name to the Clarkston Boy Scouts. If any one still owes Dad a can of pop please bring it and it will be donated to the food bank.

Clarkston &#8211; JESSE WILLIAM GODFREY, 87, passed away on December 24, 2013 at Williamsburg Retirement Center. He was born August 12, 1926 in Clarkston UT to Henry E. and Agnes Wheatley Godfrey. He grew up farming in Clarkston and served... View Obituary & Service Information

The family of Jesse William Godfrey created this Life Tributes page to make it easy to share your memories.