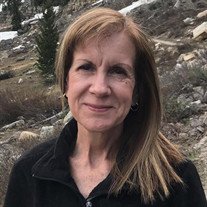 Our beloved Jennifer Ann Doan Daines, 62, passed peacefully at her home in Smithfield, Utah on October 17, 2020 due to cancer. Realizing that the disease was gaining the upper hand, she expressed sadness about missing family events she had always looked forward to, on the other hand, she said she didn’t fear death, affirming her belief that great happiness is ahead for her and her family thanks to the goodness and power of Jesus Christ. Jennifer was born to Virgil Lee and Sarah Ellen Doan on August 13, 1958 in Harlingen, Texas. Her childhood years were spent in several locations dependent on her father’s career in the United States Air Force. The family eventually settled in Bossier City, Louisiana, where she finished elementary, middle school and high school, graduating in 1976 from Parkway High School. Following studies at Ricks College, cannery work on Kodiak Island in Alaska, and employment as a nanny in Washington, D.C., Jennifer felt impressed to volunteer for service as a full-time missionary for the Church of Jesus Christ of Latter Day Saints and was called in 1980 to Guayaquil, Ecuador, where, despite doubts about her own capabilities, she became fluent in Spanish and learned to build bridges connecting many people of diverse cultures, races, and beliefs to the blessings of the gospel of Jesus Christ. She loved it! On March 30, 1982, Jennifer married David R. Daines, Jr. in the Logan Temple. David had crossed paths with “Hermana Doan” in Ecuador while on a business trip and, though immediately smitten, pursued her after she finished her mission. They are parents of six children: LeeAnne (Carlos) Carrasco, Nathan (Sierra), Daniel, David III, Jameson, and Laurie. Five lucky ones call her Grandma: Carlos, Lucas, Dylan, Isabel, and Cameron. Jennifer’s special mothering and grand-mothering gifts included easy-going good humor, unbounded ability to listen and connect, patience, and savvy for health and nutrition. Intermittently she homeschooled each of her children. David’s career took the family to Ecuador, New Jersey, and Haiti, then during 2002 to 2005 David and Jennifer led the Guatemala City Central. While caring for her six children in the challenging environment of Central America, she enthusiastically served as “mission mom” to a total 517 elders and sisters who served in the mission during these years. All received birthday cookies, arrival and farewell dinners, and (most importantly) unconditional love in each encounter. Many have expressed their sorrow and condolences as they have learned of her parting. Jennifer received her long-awaited and well-deserved “nest” in Smithfield in 2005, where she loved spending time with extended family, neighbors, ward family members, and people of all cultures, faiths, and political persuasions. She cherished opportunities to serve children as ward Primary President, Cub Scout leader, and Head Start preschool assistant. She enjoyed walks with David along mountain trails and Cache Valley’s four seasons – even winter! Jennifer is preceded in death by her father Virgil Doan and is survived by her mother Sarah Doan, her husband, children and grandchildren, and her siblings Rodney (Sue), Bruce (Chris), Jeff (Sabette), Dwight (Kristi), and Amy Bates (Stan). A memorial service is planned at the Smithfield Cemetery on Friday, October 23 at 11:00 a.m. Those attending are invited to bring their own chair. The service will also be streamed live via Zoom using the following link: https://us02web.zoom.us/j/3899935574?pwd=bnJZdkxGQTRrbzkvK2NMM3VMYURuZz09 Passcode: cvmortuary

Our beloved Jennifer Ann Doan Daines, 62, passed peacefully at her home in Smithfield, Utah on October 17, 2020 due to cancer. Realizing that the disease was gaining the upper hand, she expressed sadness about missing family events she had... View Obituary & Service Information

The family of Jennifer Ann Doan Daines created this Life Tributes page to make it easy to share your memories.