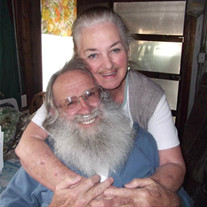 Jack Merrill Gilgen February 21, 1941 - September 21, 2018 Jack Gilgen of Nibley passed away peacefully Sept. 21, 2018, at McKay Dee Hosptal in Ogden, Utah. His life was truly a blessing to everyone he met. Jack was born Feb.21, 1941, Logan, Cache, Utah, son of John "Chick" Gilgen Jr. and Dora Merrill. He lived in Lewiston, Utah, before moving to 10th Ward, Logan, Utah. He attended Adams Elementary, Logan Jr. High and Logan High School. He was president of FFA in his teens and was a sharpshooter in ROTC. He was one of the best sheep shearers in the area. He was gentle, thorough, fast, and fun to watch. He took both county and state Reserve and Grand Championships several years in a row in his teens. Jack didn't love to fish; he lived to fish. He taught so many the art of fly fishing. He was an avid hunter. Jack worked at Bundy Motor, DelMar Club, construction crews throughout Utah.. employed for 16 years by USU., grounds maintenance at Animal Science Farm, lived on farm in College Ward, Willow Park Zoo, Logan city, later fairgrounds manager for Logan city, Cache County. He retired after 16 years from Logan city. Jack worked with and loved many young community service people, had lifelong friendships. Jack was High Adventure Scout Leader in College Ward and enjoyed taking the Scouts on outings. Jack truly lived by his goals. He had many wonderful friends from every walk of life. He welcomed everyone to his home. Jack married Grace E. Lay Walbom on July 16, 1976, in S.L.C., Utah. They were partners in everything. Grace says: "It was an eye-opening adventure being married to Jack, my best friend. I'd marry you again, Sweetheart." He was an instant "Dad" and "Grandpa" the same day. He truly was a remarkable dad and grandpa to all little ones. Jack was preceded in death by his parents and a sister, RaNae J Rich. He is survived by his wife Grace; nephew Frank McCauley; nieces Janice Graham, Bonnie Hakim, DeAnn McCauley and Patricia Christiansen. All he dearly loved. At Jack's request, there was no traditional funeral or viewing. We honored that wish. Private graveside service held at Logan City Cemetery on Oct. 5, 2018. Thanks to Cache Valley Mortuary and Todd Goodsell for the special care of Jack, teams at Logan Hosp. and McKay Dee Hosp. for their wonderful compassion. Cremation was under the direction of Cache Valley Mortuary, 80 W. 4200 N., Hyde Park, Utah. Please share a favorite memory of Jack or offer condolences to the family by leaving a tribute on this page.

The family of Jack M. Gilgen created this Life Tributes page to make it easy to share your memories.