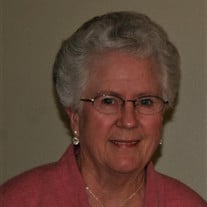 Irene Keller Lusk (84) Wellsville UT, a loving sister, wife, mother, grandmother, and great-grandmother, passed away on May 3, 2021 in Logan Utah. Irene was born June 23, 1936, the daughter of Alice Loretta (Anderson) and Ulrich Keller. She was the third child of seven children. Irene is a graduate of South Cache High School and LDS Seminary. In 1960, she married Orlin D Lusk in the Logan LDS Temple. They were blessed with 10 children. Irene was an excellent employee. She worked for a restaurant, sold trampolines, worked as a store clerk, provided childcare, and was a receptionist. Her favorite job was working as a typist in the Logan Temple. Irene was an excellent homemaker. She baked bread, canned vegetables and fruit, made home-made jam, and grape juice. She was an excellent seamstress and sewed many of her family’s clothes. Irene was an active member of the Church of Jesus Christ of Latter-day Saints. She served as a temple officiator and as a typist for the Logan Temple for many years. She served in many other church callings and was a dedicated church worker regardless of the call. She enjoyed being outdoors and camping with the family. Her favorite pastime was spending time with her children, grandchildren, and great-grandchildren, especially the little babies. She will always be treasured, and she will surely be missed by her husband, children, grandchildren, great-grandchildren, and extended family members. She is survived by her husband, Orlin D, and her children: Scott (Ann) Lusk, Will (Brenda) Lusk, Debra (Dan) Brog, Karl Lusk, Kristine (Blaine) Thurgood, Angela (Kevin) Drollinger, Kevin Lusk, Michael (Amber) Lusk, Doug (Peter) Lusk, Mark Lusk. Irene is survived by five siblings: Helen (Larry) Batt, Regene Israelsen, Richard Keller, Loretta Black, and Janet (Alve) Murdock. She is also survived by brother-in-law, Dale Lusk, and a sister-in-law, Karen Keller, as well as 31 grandchildren and 22 great-grandchildren. She is preceded in death by her parents and brother, Ronald Keller. A viewing will be held on Saturday, May 8, 2021 from 9:00 a.m. to 11:00 a.m. at the Chapel on 660 South 100 West, Wellsville, Utah. Funeral services will follow the viewing at 11:30 a.m. Interment will be in the Wellsville City Cemetery.

The family of Irene Keller Lusk created this Life Tributes page to make it easy to share your memories.