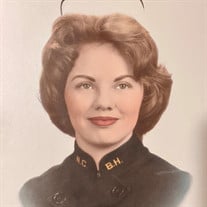 Grethel Charlene Spakes Odum, formerly of Perry, Florida and Swansboro, North Carolina, passed away peacefully with her husband and daughter at her side on April 21, 2020 at her home in Terrace Grove, in Logan, Utah, of kidney failure. Charlene was born December 7th, 1940, in Key West, Florida to Charlie F. and Grethel Whitmire Spakes. Her father had a 32-year career in the Marines, and the family lived in many places including California, Florida, Hawaii, North Carolina, South Carolina, and Virginia. Charlene graduated in 1959 from Swansboro High School in North Carolina, where she played on the women’s basketball team and was a majorette in the marching band. She attended nursing school at North Carolina Baptist Hospital in Winston Salem, where she graduated and became a Registered Nurse in 1962. Charlene married James Sherwin Odum on November 24, 1962, in Swansboro, North Carolina. The couple moved to Perry, Florida where Sherwin was employed as a forester with Procter and Gamble, and Charlene began working as a nurse at Doctor’s Memorial Hospital. She was recognized for her leadership and high standards of care, and was quickly promoted to day-time charge nurse, overseeing the function of the nursery, emergency room, and all other hospital wards. She also studied alternative medicine in her later career. Charlene and Sherwin were active in First Baptist Church in Perry. They taught Sunday School to children and worked in the nursery ministry. Charlene cared deeply about others and prayed for their well-being, often receiving prayer requests from neighbors and her church family. She prayed for many people, continuing a multi-generational tradition of intercession from her mother’s side of the family. Charlene was a talented artist, working with pastels, water color, and oil paint. She exhibited her work in the Florida Forest Festival Art Show, winning numerous awards. Charlene was pre-deceased by her sons Jonathan and Charlie, and is survived by her husband of 57 years, Sherwin; her daughter Amy; son-in-law Mark Larese-Casanova; grandchildren Emma, Madeline, and James Henry; sisters Ginger Eatman and Mary (Tom) Morris; Sisters-in-Law Helen and Lorraine Odum and Brother-in-Law Dwayne Rufenacht; and numerous nieces and nephews. A memorial service will be planned at a later date due to the Covid-19 pandemic. In lieu of flowers, friends who wish can make a donation to Tender Care Home Health and Hospice of Utah or the American Diabetes Association.

Grethel Charlene Spakes Odum, formerly of Perry, Florida and Swansboro, North Carolina, passed away peacefully with her husband and daughter at her side on April 21, 2020 at her home in Terrace Grove, in Logan, Utah, of kidney failure. Charlene... View Obituary & Service Information

The family of Grethel Charlene Odum created this Life Tributes page to make it easy to share your memories.