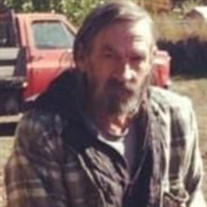 Gerald Brooks Lott, of Trenton Utah passed away April 22, 2020 at the age of 67. Born to Melvin G Lott and Lula Buttars Lott in Logan, Utah. Brooks joined his mortal family March 9, 1953, the fourth child to a family of nine. Brooks attended Trenton Elementary, Lewiston Junior High and Sky View High School. Brooks lived in Trenton his entire life. Trenton was not only home to Brooks and his friends, but many square miles of playground where he and his friends would find a new adventure almost every day.Many of which his Mother never knew about. Brooks had many interests that included, motorcycles, guns, gardening, cooking, canning, metal art, creating artwork pieces from almost anything, repairing everything from garden equipment to cars and trucks. For some time into the future, some of Brooks metal artwork will be seen on porches and under mailboxes as a subtle reminder of him. Brooks had a compassionate nature and shared what he had with those in need. As is often that case with the passing of a loved one, personal stories are shared that often start with, “I remember when I needed.” Brooks has a compassionate legacy that will continue to be shared for a long time. Brooks is preceded in death by His Father, Melvin Lott, his Mother, Lula Buttars Lott, and his brother Kim Lott. Brooks is survived by his siblings Kent (Kathy) Lott, Doyle Lott, Bart (Lesa) Lott, Shawn (Ellen) Lott, Shelli Lott Bickmore, Travis (Terri) Lott, Troy Lott. We wish to thank, Monty Melani and Tara King Smith of Primrose Hospice Care, Maple Springs of North Logan and Cache Valley Mortuary. A graveside service will be held at the Trenton Cemetery, April 27, at 12:00. Under the direction of Cache Valley Mortuary. Share memories about Brooks at. www.cvmorturay.com

The family of Gerald Brooks Lott created this Life Tributes page to make it easy to share your memories.