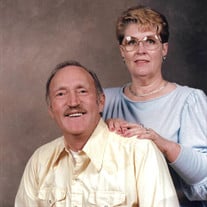 Gaydra Berniece Douglass Hardman quietly passed away on February 18, 2020 at Rocky Mountain Care in Logan, Utah. Gaydra was born January 15, 1941 in Logan, UT, the oldest of five children of Howard Blaine Douglass and Velma Berniece Riggs Douglass. The family moved to Ogden and lived there for three years before returning to Cache Valley to be close to family. They found a place to reside in Hyde Park, Utah where Gaydra spent her childhood and adolescent years, making many good friends and creating happy memories. One of her talents was taking care of animals and healing the lost straggly cat. She couldn’t bear to see a cat in distress. Gaydra attended Hyde Park Elementary, Smithfield Junior High, and graduated from North Cache High School. Gaydra married Cyril (Cy) Eugene Hardman on July 6, 1959 and they were blessed with three daughters and one son. After their marriage they moved to Arbon Valley, ID to take over the family dry farm; later moving into Pleasant View, ID for a few years. They then moved their family to Smithfield, UT in 1976 and were content to spend their lives there surrounded by family, friends and neighbors. Cyril and Gaydra were caring parents as well as foster parents to many young boys and girls who were like their own. They opened their door to family, friends, and even a stranger, providing a place to live and food to eat. They were very compassionate, making others feel loved and needed. Gaydra worked at Presto where she met many good friends and associates. She loved to crochet and knit and knit many beautiful afghans and shawls for family. She enjoyed canning and baking and could make the best bread in Arbon Valley, usually baking bread at least twice a week, she was a wonderful cook. She had some medical problems in her later years but was one that didn’t complain. Her comment was “It is what it is” and she endured no matter what life passed to her. Cyril passed away in December 2014 leaving a great void in Gaydra’s life. She moved into Williamsburg Retirement and Assisted Living shortly after Cyril’s passing. This was one of the highlights of her life as she made so many good friends and became a “social butterfly”, often arising at 5:00 a.m. in the morning so she could meet her friends in the kitchen at 6:00 a.m. to sit and chat before breakfast was served. She not only made friends with the residents but also the staff and thoroughly enjoyed her life at Williamsburg. Gaydra was preceded in death by her parents, her husband, Cyril (Cy) Hardman, her daughter, SheriLyn Davis, and her granddaughter, Tory Chatterton. She is survived by her children, Craig (Lupe) Hardman, Shelly Hardman Chatterton and Karene Hardman Ruminer, 19 grandchildren and 42 great grandchildren. She is also survived by her sister Bonnie (Bruce) Lower, Jim (Jolene) Douglass, Genette (Randy) King and Karren (David) Hendricks. Gaydra will be deeply missed by family and friends, but we know that there was a happy reunion on the other side of the veil and she is at last able to get up run and walk without a scooter or wheelchair. An Open House Memorial will be held in her honor on Friday, February 28, 2020 at the Hyde Park Civic Center located at 113 E Center St, Hyde Park from 4:00 p.m. to 7:00 p.m. Friends, neighbors and family are invited to stop by and visit and share memories of this sweet mother, sister and friend.

The family of Gaydra Bernice Hardman created this Life Tributes page to make it easy to share your memories.