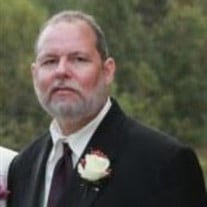 Gary Alan Turpin was called back to Heaven to be with his Dad on Thursday, August 5, 2021. He died at the age of 59 due to complications from Diabetes. Gary was residing in Millville, Utah at the time of his death. He was known and loved by many who considered him to be a kind, caring & generous man. Gary was born January 16, 1962 in Roanoke, Virginia to Paul & Osie Turpin. Gary was the youngest of 5 children. After graduating from High School, Gary continued to live in Roanoke where he married Kathryn Fitzgerald. After welcoming a son the family moved to Orange County, California where they welcomed a daughter & another son & later divorced. Gary continued to live in California for many years until he moved to Utah where he spent the last 20 years of his life. Throughout Gary’s life he had a variety of jobs including being an EMT & an appliance repairman, but his true career path was in being an IT Technician. Gary’s favorite hobby was to be a HAM Radio operator. This enabled him to serve on several emergency preparedness committees. Gary also became involved in the Animal Rescue Community in Utah, specifically in rescuing cats & kittens. He found enjoyment in a variety of life-saving efforts, but found the most enjoyment in fostering many cats & kittens over the course of the last 9 years. He was a gentle and compassionate caregiver and devoted himself to defending and protecting the fragile lives of his foster kittens. In April of 2003, Gary was introduced, through a co-worker, to Cami Powell. The co-worker became his brother-in-law when the couple married on December 13, 2003. Gary & Cami resided in Salt Lake City then Bountiful before moving to Millville in January 2021. Gary has enjoyed his membership in the Church of Jesus Christ of Latter-Day Saints for the last 11 years of his life. He was able to use his HAM radio capabilities in the callings he held. Gary is survived by Cami, his wife of 17 years; his 3 children, Gary Alan (Sonya) Turpin, Ashley Turpin, Christopher (Amanda) Turpin, & 8 grandchildren; His mother, Osie Turpin; 4 siblings, Barbara Chambers, Libby (Pat) Driscoll, Paul Douglas (Sandy) Turpin, Michael Turpin; his mother in-law, Marlene Powell, 8 siblings in-law Mark Powell, Kevin Powell, Kelly Powell, Kristen (Phil) Hamnett, Brenda (Garth) Ferrin, Derek (Lori) Powell, Blair (Justine) Powell, Justin (Lynn) Powell; and many nieces and nephews, all of whom he loved and enjoyed spending time with when he was able to. He is also survived by his fur babies (cats) who brought him much comfort as he struggled with several health issues the last part of his life. Gary is preceded in death by his father, Paul Andrew Turpin and his father in-law, Merlyn Wilson Powell. Funeral services will be held Wednesday August 11, 2021 at 12:00pm at the Church of Jesus Christ of Latter-Day Saints (110 South Main Millville, UT) There will be a viewing held Tuesday August 10, 2021 7:00-8:30pm and prior to the funeral services on Wednesday 10:30-11:30am at the same location. Interment will take place following the funeral at the Millville C

Gary Alan Turpin was called back to Heaven to be with his Dad on Thursday, August 5, 2021. He died at the age of 59 due to complications from Diabetes. Gary was residing in Millville, Utah at the time of his death. He was known and loved by... View Obituary & Service Information

The family of Gary Alan Turpin created this Life Tributes page to make it easy to share your memories.

Gary Alan Turpin was called back to Heaven to be with his Dad...