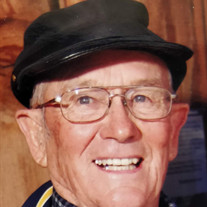 In the early afternoon of Wednesday, February 20, 2019 Gary Bowen, “Bo”, beloved companion, son, father, uncle, cousin and friend got in his car and putted up the road to his heavenly home. Gary Hunter Bowen was born March 14, 1933 in Logan, Utah to William Clair Bowen and Elsie Hunter. He was the third son of five brothers and one sister. His early years were spent in River Heights, where he attended elementary school. The family then moved to Mendon, Utah where he completed elementary school. From Mendon, he rode the Bamberger train to Wellsville to attend and graduate from Wellsville Jr. High. He attended and graduated from South Cache High School in 1951. While there, he served as a cheerleader (and a good one too!) along with several other achievements. After high school, Gary first worked for his dad’s cousin, Russell Bowen, in the bee business in California. In 1952, he returned to Cache Valley and married Roberta Norris on July 31st in the Logan Temple and they settled on the Norris homestead in Paradise. After he married, he worked for Jack Parson Construction until March 1960 when he started with AT&T Telephone Company, retiring April 30, 1992 after 32 years of service. Gary served in the Boy Scouts, as a counselor in the Bishopric with Bishop Grant Norman, and in three different High Priest group quorum presidencies in the Paradise Ward. After Gary retired, he served on the Paradise Cemetery Board and the Paradise Irrigation Board. Throughout their lives, Gary and Roberta loved to dance, and celebrated their 50th wedding anniversary at the Elite Dance Hall in Hyrum, Utah. Gary enjoyed riding horses and loved to go to the Wind River Mountain Range. He also enjoyed riding snowmobiles and four-wheelers with family and friends up until just months before he passed away. Gary is survived by his wife: Roberta, his son: Wm Conrad (Paula), and daughters: Teresa Earley (Steven), Janene, and Wendy Ann Eliason (Jeff). Also, two brothers: Clare (Pat), Michael (Lorraine), and one sister: Susan Howard (Ed). Gary and Roberta have 12 grandchildren and 10 great-grandchildren. Gary was preceded in death by his father and mother and his two older brothers, Robert and Fred. A viewing is scheduled for Saturday, March 2nd, 2019 from 10:30 am -12:30 pm followed by the funeral at 1:00 pm. Both will be held at the Paradise 2nd Ward chapel located at 9060 South 200 West Paradise, Utah 84328. The Bowen Family would like to thank the staff at Welcome Home Assisted Living and Tender Care Hospice, especially: Bruce Morrison, Cheana R, Kaylee B, Stacie T, and Andrea P. Thank you to the 9th Branch, President Glen Dawson, and Brother & Sister Keith Painter in Bountiful, Utah and to the Paradise 2nd Ward Relief Society and Elders Quorum for providing the luncheon and setting up the chairs and tables for the services. A special thank you to Bishop Jeffrey and Jessie Gibbs and to the Paradise 2nd ward past bishoprics and ward members for their love and support of our family over the years. In lieu of flowers, please make contributions in honor of Gary Bowen to the Paradise 2nd Ward Missionary Fund. Funeral services are under the direction of Cache Valley Mortuary 80 W 4200 N Hyde Park, Utah 84318 435 787 8514. Condolences or memories may be shared with the family on this website.

The family of Gary Hunter Bowen created this Life Tributes page to make it easy to share your memories.