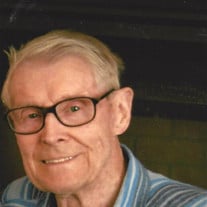 Fred Edward Amundson died of natural causes on April 11, 2017 at his home at the age of 93. He was born on April 7, 1924 in Hillsdale, Wisconsin the second of two children to Heldfred and Olina Amundson. He grew up on a farm, was drafted into the army and trained as a paratrooper. Upon discharge he returned to the farm for a short time, then went to Yellowstone Park to work as a maintenance worker with some friends from the army. They then decided to go to the Uintah Basin where he started his career as a plumber. He later earned his plumbing contractor license. It was there where he met the love of his life, Edith Mary Hardinger. It was also there, he was introduced to and baptized a member of the Church of Jesus Christ of Latter-day Saints. Fred and Edith were married on May 29, 1953 and were sealed in the Salt Lake Temple February 18, 1954. They have four children, Vicki, Luann, Jim, and Bryan. They have 18 grandchildren and 17.3 great grandchildren.Over the years they have lived in several Utah cities including Roosevelt, Salt Lake City, Granger, Richmond, Vernal, Roy, and Logan.He worked at Utah State University from 1969 to 1988 as a plumber. He was a strong, committed, faithful member of the church and loved attending the temple. He has served in many positions including bishopric and high council. He enjoyed serving in any capacity without need of recognition.They have enjoyed the company of many close friends over the years and have traveled and cruised many places after retiring.He was preceded in death by his parents, his sister Beatrice Flekkerud, and one grandson Alex Amundson. He is survived by his wife and children. He was greatly loved and will be missed by all.Funeral services will be held on Saturday April 15, 2017 at the Richmond Utah Stake Center, 135 W. Main, Richmond, Utah. The viewing will begin at 11:30 am, til 12:30 pm with the funeral following at 1:00 pm. He will be interred at the Richmond, Utah Cemetery.

Fred Edward Amundson died of natural causes on April 11, 2017 at his home at the age of 93. He was born on April 7, 1924 in Hillsdale, Wisconsin the second of two children to Heldfred and Olina Amundson. He grew up on a farm, was drafted into... View Obituary & Service Information

The family of Fred Edward Amundson created this Life Tributes page to make it easy to share your memories.