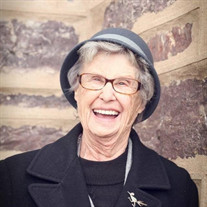 Fern Kennington Jensen quietly passed away in her sleep on February 5, 2020 at the age of 92 while at the home of her daughter in Hyde Park, Utah. Fern was born on September 25, 1927, in Fairview, Wyoming to William Henry and Luella Nield Kennington.  She was the sixth of eight children.      Fern was raised and attended school in Afton, Wyoming.  During high school, she met the “Bedford Boys,” marrying Rex Levon Jensen in the Idaho Falls Temple.   They began their married life and became parents on the Fluckiger ranch in Bedford. A few years later they were able to build a house of their own on the ranch where they lived until Rex became ill.  It was then he built a house for her and his mother in the town of Bedford and sold the family ranch. Through the years she found employment at the Star Valley Cheese Factory, Gephart’s general store in Afton, and then owned her own residential cleaning business. Fern loved her family dearly.  She made sure that each of her children, her grandchildren, and her great-grandchildren had a handwritten birthday card every year without fail, letting them know how much she loved them.  Her laugh was infectious and because of her kind and sincere nature, she was never lacking for friends. Friends remember her as the “fun one.” No one forgot Fern after spending any amount of time with her.  A family friend recently shared that she used to pretend as a child that Fern was her grandma because she was so much cooler than her own grandmother.   Fern was young at heart and always active.  Throughout her life, she sewed enough clothes and tied enough quilts to keep a small village warm.  She enjoyed being on the farm, raising chickens, and homemaking. She was also known for her famous fudge which won first place in the county fair.   She also made bread dough bears for her grandchildren and their friends when they would visit. She canned fruit and made beet pickles. She kept a garden and found joy in the simple things of life.    Fern was active in the LDS church, serving a mission to the Salt Lake City Family History mission.  She loved to go to the temple. Until her death, she was actively involved in family history with her daily indexing and extraction work.  She was even featured in the Children’s friend magazine as the oldest primary teacher at the age of 90.    Fern always had a smile and was willing to help others in need.  She truly exemplified charity and kindness for everyone she came in contact with. She is preceded in death by all of her siblings: Neal Kennington, Maude Kennington Lindburg,  Velda Kennington Reagan, Reba Kennington Miller, Wm.Hugh Kennington. Gayle Kennington Wilkes and JoAnn Kennington Jenkins. Rex and Fern had six children:    Randall L. Jensen married to Lana Dana Jensen, Bill K. Jensen and RoAnn Duke Jensen, Kristine Jensen Jones married to Kurt Alan Jones, Janmarie Jensen Smith married to Randall Eldon Smith  Nolan Rex Jensen married to Valerie Tolman Jensen, Joan Jensen Lancaster married to Art Lancaster.    She had 21 grandchildren and 41 great-grandchildren and 2 great-great-grandchildren.

Fern Kennington Jensen quietly passed away in her sleep on February 5, 2020 at the age of 92 while at the home of her daughter in Hyde Park, Utah. Fern was born on September 25, 1927, in Fairview, Wyoming to William Henry and Luella Nield Kennington.... View Obituary & Service Information

The family of Fern Kennington Jensen created this Life Tributes page to make it easy to share your memories.

Fern Kennington Jensen quietly passed away in her sleep on February...