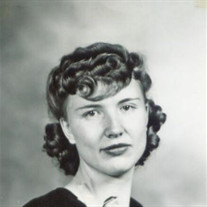 Elna Sutherland Goodsell slipped away from her earthly family to join her eternal one this Wednesday, 12 April, 2017 Elna was the first child and only girl born to Erwin and Alene Sainsbury Sutherland. Followed by four little brothers. She grew up in the very little town of Fielding, Utah, and attended the local schools including Bear River High School where she graduated. Elna helped her Mother Alene raise her 4 brothers. Dale Erwin Sutherland – Oregon, Walter Rial Sutherland (wife Janice) – Ogden, Utah Kent L Sutherland (wife Jean) – Ogden, Utah Glade G. Sutherland (deceased) Glade’s wife Linda lives in Roy, Utah Elna was a happy normal child growing up, though quite shy and reserved. She was a tiny little girl, and she had lot’s of boys hanging around because she was sooo cute and dainty. In 5th grade, or thereabouts, she started to grow taller. Soon she had passed the other girls up and most of the boys. She was painfully aware of her height, as she was now the tallest girl her age. In her class picture she later explained that she was actually a head taller than it looked. She was on the back row scrunched down, so she was the same height as the other girls.She had become shy, and didn’t date much in High School, but that was all about to change dramatically. She was spending time in Clarkston with her Grandma Godfrey, and a bunch of the girls and boys decided to pile into a truck and drive to the famous Cache Junction Café (“Beanery”). Another bunch of Newton kids were there also, including a boy named Wesley. They all made plans to go to a dance in Mendon the following night. It’s been 78 years since they met. 8 children, and many grandkids, and great grandkids and great greatgrandkids later, it’s time to say goodbye (for now) to an amazing woman. They were sealed to each other in the Logan Temple, and they know that they will see each other again soon. Elna is survived by: Her Husband: Wesley Goodsell of Logan Her Daughter: Linda Cutler of Logan Her Son: Gary Goodsell of Newton Her Daughter: Carol Jacobs of Logan Her Son: Mike Goodsell (Jayne) of Tremonton Her Son: Ken Goodsell (Jackie) of SmithfieldHer Daughter: Joyce Hall(Scott) of Logan Her Daughter: Lori Goodsell of North Logan Her Daughter: LeAnn Yoder (Jack) preceded her in death. A special thanks to Dr. Russell Hirst, The angels at Intermountain Hospice, and Kim Godfrey of Cache Valley Mortuary. Services will be: Viewing: 6 – 8 pm Cache Valley Mortuary 80 West 4200 North, Hyde Park, Utah Viewing: 09:30 to 10:30 am Newton Ward Chapel 76 South 100 West, Newton, Utah Funeral Services: Newton Ward Chapel. Burial will be in the Newton Cemetery, Newton, Utah

Elna Sutherland Goodsell slipped away from her earthly family to join her eternal one this Wednesday, 12 April, 2017 Elna was the first child and only girl born to Erwin and Alene Sainsbury Sutherland. Followed by four little brothers. She grew... View Obituary & Service Information

The family of Elna Goodsell created this Life Tributes page to make it easy to share your memories.

Elna Sutherland Goodsell slipped away from her earthly family...