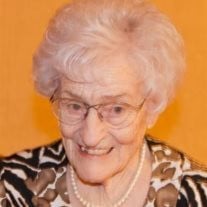 Elda Marchant Van Tassell, 89, passed away peacefully at her home in Tremonton, Utah on March 14, 2014 and returned to the waiting arms of her eternal companion, Carl M. Van Tassell.She was born September 08, 1924 in Peoa, Utah to Alonzo Justice Marchant and Minerva Jean Casper. She was the seventh of ten children. She graduated from South Summit High School in Kamas, Utah and attended BYU for two years.She married Carl M. Van Tassell on March 23, 1944 in the Salt Lake LDS Temple. They were blessed with five sons and were blessed to have Alfred Cesspooch join their family.They lived in Tabiona, Bridgeland, Myton, and Golden Valley, south of Burley, Idaho. After Carl’s death in 2000, she moved to Tremonton, Utah in 2007.She was a faithful member of The Church of Jesus Christ of Latter-day Saints and served in the stake primary, relief society, as a stake missionary, and had many other opportunities to serve and grow in the gospel. She served a full-time mission with Carl and her sons in Randlett-Duchesne County. She later served with Carl in the Detroit-Dearborn Mission. For several years, she served in the family history extraction program, where she spent countless hours and gained life-long friends.Elda learned to work at a very young age and taught her sons the value of hard work.She loved working outdoors, was famous for her fried chicken, and never seemed to run out of ice cream.“The greatest honor of my life has to be the lives of our five sons, their love as a family and their faith in the truth of the restored gospel.” -Elda Van Tassell Elda is survived by her five sons: Boyd M. (Pat) of Spanish Fork, Utah; Kent; Rulon E. (Paula) of Tremonton, Utah; Carl M. Jr. (Joan) of Rupert and Chad (Gina ) of Heyburn; Alfred Cesspooch, two sisters: Grace Johnson and Nancy Laird; 27 grandchildren and 84 great-grandchildren. She was preceded in death by her husband Carl; her parents; three brothers: Moroni Marchant, Jay Marchant, and Glen Marchant; four sisters: Jean Olsen, Erma Van Tassell, Hazel Thomson Marrott, and Lula Allman; a daughter-in-law Amalia Van Tassell; and a grandson, Tyson Van Tassell.Funeral services will be held 10 a.m. Saturday, March 22, 2014 at the Tremonton Third Ward building, 9590 N. 6800 W. Tremonton, UT 84337. Friends may call Friday evening from 6-8 p.m. and one hour prior to the service on Saturday at the church. Burial will follow at the Marion Cemetery in Oakley, Idaho.The family suggests the memorials be directed to the LDS general mission fund.The family wishes to give special thanks to Rulon, Paula, and their family for the loving care provided to our mother in her later years.Services are under the direction of Cache Valley Mortuary

Elda Marchant Van Tassell, 89, passed away peacefully at her home in Tremonton, Utah on March 14, 2014 and returned to the waiting arms of her eternal companion, Carl M. Van Tassell.She was born September 08, 1924 in Peoa, Utah to Alonzo Justice... View Obituary & Service Information

The family of Elda Marchant VanTassell created this Life Tributes page to make it easy to share your memories.

Elda Marchant Van Tassell, 89, passed away peacefully at her...