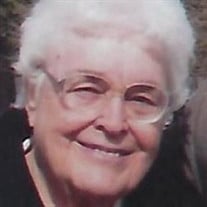 Edith Mary Hardinger Amundson passed away September 6th in Logan, Utah of complications related to a fall, she was 85 years old. She was born January 13, 1932 in Roosevelt, Utah to George MacLamar Hardinger and Sarah Samantha Herbert. She was the 11th of 13 children.Edith grew up in Roosevelt and lived in the same home until she married Fred Amundson on May 29, 1953. They were later sealed in the Salt Lake Temple February 18, 1954. Over the years they have lived in several Utah cities including Roosevelt, Salt Lake City, Granger, Richmond, Vernal, Roy, and Logan. During her youth she worked at a movie theatre and a malt shop. She loved to play softball and other sports. After high school she began working in banking until Vicki was born and then they moved to Salt Lake where the rest of their children were born. While living in Granger she started to bowl with a league, and won many trophies with an average of 265 and bowled one perfect game. They moved to Richmond in 1968 and she resumed work in banking. She was promoted to bank manager at the Richmond First Security branch and worked there until retirement in 1989. After retirement they settled in Roy, Utah. Edith was an active member of The Church of Jesus Christ of Latter-Day Saints and had a strong testimony of the Gospel. She faithfully served in many callings including presidencies of Primary, Young Women and Relief Society. She was a strong leader and a good friend. She is preceded in death by her husband, parents, all of her siblings, and one grandchild. She is survived by her four children, Vicki ( Steve) Bodily, Luann (Grant) Cooper, Jim (Artus), and Bryan (Jana), and 18 grandchildren and 17.95 great grandchildren. She was greatly loved and will be missed by all. A special thank you to the many people who were such good friends in Richmond and at Monte Vista in Roy. We also want to thank the staff at Williamsburg and Rocky Mountain Hospice and Care Centers for their loving care during this last year. Funeral services will be held on Monday September 11th at the Richmond Utah Stake Center, 135 W. Main, Richmond, Utah. The viewing will be from 9:00-10:30 am, with the funeral following at 11:00 am. She will be interred at the Richmond, Utah cemetery. A special thanks to the Richmond 3rd Ward for there compassionate service

Edith Mary Hardinger Amundson passed away September 6th in Logan, Utah of complications related to a fall, she was 85 years old. She was born January 13, 1932 in Roosevelt, Utah to George MacLamar Hardinger and Sarah Samantha Herbert. She was... View Obituary & Service Information

The family of Edith Mary Hardinger Amundson created this Life Tributes page to make it easy to share your memories.