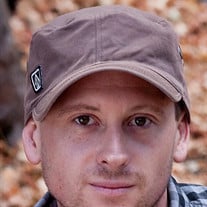 Dustin Rand Wheeler, 37 of Franklin, Idaho died June 17, 2019. He was born January 26, 1982 in Logan Utah, the son of Randen and Cindy (Thomas) Moser. He attended schools and worked at various jobs in Cache Valley. He also worked in Yellowstone National Park, Everglades National Park, and Zions National Park. He attended trade school in Atlanta, Georgia. Dusty saw many different parts of the U.S. as a young man. He made many committed friendships and had a lot of adventures. It was while working in Yellowstone that he met his wife, Misty. They became friends and would remain so for many years. He would later marry her on January 31, 2015. One of Dusty’s best moments in life was when his daughter, Georgiana, was born. Together, they shared a love of all things in nature; clouds, trees, flowers, birds, and animals. Dusty found peace in the mountains and lakes. He loved to hike, camp, and swim. He is survived by his wife, Misty Wheeler; daughter, Georgiana Collette Wheeler; father Randen Wheeler; mother, Cindy (Clayton) Moser; sister, Brittany (Nate) Bitton; and sister, Nikki Wheeler. He is also survived by several nieces and nephews, as well as several aunts, uncles, and cousins. The family wishes to extend a heartfelt thanks to the Cache County and Franklin County Search And Rescue Teams, also the Cache County Sheriff’s Office and the Logan City Police Department rendered in our behalf. A graveside will be held in the Franklin, Idaho cemetery on Tuesday, June 25, 2019 at 11:00 AM. Services and being handled by Cache Valley Mortuary. Friends and family are invited to attend.  Memories or condolences can be shared with the family on this website.

Dustin Rand Wheeler, 37 of Franklin, Idaho died June 17, 2019. He was born January 26, 1982 in Logan Utah, the son of Randen and Cindy (Thomas) Moser. He attended schools and worked at various jobs in Cache Valley. He also worked in Yellowstone... View Obituary & Service Information

The family of Dustin R. Wheeler created this Life Tributes page to make it easy to share your memories.