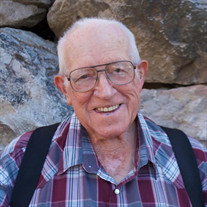 Our beloved husband, father, grandfather, great grandfather and great great grandfather, Donald Larsen Murray, passed away Wednesday, February 10th, 2021 surrounded by his family at Logan Regional Hospital. Donald was born February 25th,1935 in Richmond Utah to Carl T. and Barbara L Murray. Donald was the oldest in a family of three children, he had two younger sisters and he resided in Richmond for the entirety of his life. In school he was very active in sports playing football, basketball and participating in track. He graduated from North Cache High School before joining the army where he served his country for two years, 16 months of which were in Korea. He married his forever sweetheart, Joyce Anderson Murray, on September 10th, 1958 in the Logan LDS Temple. Together they have three children. They were married 62 years and enjoyed many trips together across North America. He worked for UDOT for 29 years where he snowplowed Logan canyon in the winter and road crew in the summer. In his younger years, Donald enjoyed his horses and hunting dogs. Some of his favorite activities were hunting, fishing, being a part of the Richmond Riders Club, participating in square dancing on horse back and the horse pulls at Richmond Black and White Days. He always had a story to tell, usually involving firecrackers or practical jokes. Donald’s stories never got old even after hearing them for a second, third or fifteenth time. In his older years, Donald traded in his horse for a four wheeler and kept riding. He was an active member of the Church of Jesus Christ of Latter Day Saints where he served a calling as a teacher in the high priests as well as a home teacher. He was also a member of the American Legion and helped with many veterans memorial services. Those who passed the Murray residence on a warm summer day could usually see him on his front porch with a wave and a smile. In the last months of his life, Donald enjoyed driving to Maverick for a diet coke and to the mail with his granddaughter Crystal. Donald is survived by his wife Joyce Anderson Murray, two sisters Karleen Cazier and JoAnn (Don) Beckstead, sister-in-law Cathy Anderson, his son Tom (Paula) Murray, two daughters Laura (Curtis) Howe and Betty Wilkins, numerous very special grandchildren, great grandchildren, a great great grandchild, and many nieces and nephews, all of which loved him very much. He was proceeded in death by his parents Carl and Barbara Murray, brother-in-law Robert Cazier, sister-in-law and brother-in-law Jean (Gordon) Parker, brother-in-law Don Anderson, son-in-law Donald Wilkins, and granddaughter Amanda Howe. Donald's family would like to say thank you to all the doctors and nurses at Logan Regional's Wound Care Center, Surgical Ward and ICU for taking such great care of him. A graveside service will be held on June 2, 2021 at 11 AM at the Richmond Cemetery

The family of Donald Larsen Murray created this Life Tributes page to make it easy to share your memories.