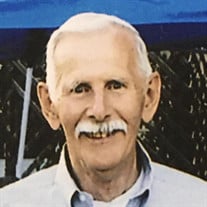 Donald C. LeVan, formerly of Charlottesville, VA, passed away on February 18, 2020, at Williamsburg Retirement Community in Logan, Utah. He was the only son of the late Leon C. and Betty Andrew LeVan of Niagara Falls, NY and later of Charlottesville. He was preceded in death by his parents, by his beloved wife of 62 years Wilma Beckman LeVan, and by great-grandson Kayden Christensen. Mr. LeVan was born in Niagara Falls, NY, on August 16, 1926, and grew up in Pekin, NY. He enlisted in the US Navy upon reaching his 17th birthday and during World War 2 served aboard the destroyer USS Lea, attaining the rank of Radioman 2nd Class. After the war ended he enrolled at the University of Buffalo and then the University of Michigan, where he earned BS and MS degrees in Geology. After graduation he began work for Stanolind Oil and while working in Casper, WY, he met his future wife Wilma Jean Beckman of Riverton. They were married on August 10, 1952, in Casper and lived in Montana before moving to Charlottesville in 1957. Mr. LeVan relocated to Logan, UT in 2019 to be closer to family. He is survived by two sons Leon W. LeVan (Elizabeth) of San Antonio, Texas, and Robert D. LeVan (Sandra) of Smithfield, Utah, and five grandchildren Timothy (Kristina) LeVan, Katherine (Michael) Hansen, Angela LeVan, Rebecca (Greg) Christensen, and Christina (Derek) Bohman. He is also survived by six great-grandchildren: Isabelle LeVan, Sunny and Louise Hansen, and Brady, Chase, and Deagen Christensen, and arriving soon, Lucas Bohman. Mr. LeVan was employed as a geologist by the Virginia Division of Mineral Resources in Charlottesville for over 30 years. He was a longtime member of the American Association of Petroleum Geologists and of American Legion Post 74 in Charlottesville. Following retirement Mr. LeVan became keenly interested in genealogy and family history, compiling an extensive collection of genealogical information for the LeVan and Beckman families and visiting many ancestral locations. He also enjoyed visiting family members, traveled extensively domestically and abroad with his wife Wilma Jean, and during his last years was a frequent visitor to the Texas Roadhouse in Charlottesville, where he was affectionately known as ”Grandpa.” A graveside memorial service for Mr. LeVan will be held Wednesday, March 4 at Mountain View Cemetery in Riverton, WY. Arrangements are being handled by Cache Valley Mortuary of Logan, UT. The family wishes to express gratitude to longtime friend and neighbor John Courtney and to the staff of the Texas Roadhouse in Charlottesville, and to the caregivers at Williamsburg Retirement Community in Logan.

Donald C. LeVan, formerly of Charlottesville, VA, passed away on February 18, 2020, at Williamsburg Retirement Community in Logan, Utah. He was the only son of the late Leon C. and Betty Andrew LeVan of Niagara Falls, NY and later of Charlottesville.... View Obituary & Service Information

The family of Donald C. LeVan created this Life Tributes page to make it easy to share your memories.