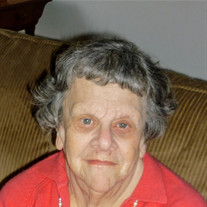 Born to Leslie and Rose Ratkay in South Bend, Indiana, Deanne was the oldest sister to Patricia and Susan. After graduation from St Mary’s Academy, she went on to work in a dress shop and cared for her two grandmothers, with whom she spoke Hungarian. One day, her dad brought a young man home from Studebaker, where they both worked, and that is when she met the love of her life, Gerry Mauch. They married in February 1964, moved into his cottage on Garver Lake, and started a family. Gerry’s job took him to many cities and towns in the Midwest before settling in Janesville, Wisconsin, which they called home for nearly 30 years. During that time, Deanne was a 4-H rabbit leader, and was active in St. Matthew’s Lutheran Church. She loved to read and greatly increased library circulation numbers wherever she called home. After Gerry’s death in 2003, she moved to River Heights, Utah and her circle grew to include friends from the Cache Senior Center where she painted ceramic figures, her local ward, and her Lutheran church. She was lovingly cared for in her home by Tara McFarland, and later at Terrace Grove Assisted Living where she enjoyed making new friends. The family would like to thank Karmon and her staff. The family would like to extend a special thanks to the staff of Terrace Grove, and Sunshine Home Health & Hospice for all of their care and kindness. Deanne is survived by her children Jeannine (Charlie) Huenemann, Joe (Chris), Mauch, and grandchildren Hanna and Ben; sisters, Patricia (Dick) Doyle, and Susan (Boyd) Johnson; niece Kimberly (Jay) Smith, and nephews Ryan (Keiko) Doyle, Sean (Junko) Doyle, Kevin (Bronwyn) Caster, Chris (Aprilfawn) Caster. Further survived by nieces Lynda Adas, Claudia (Randy) Schroedl, Mary (Tom) Erie, and nephew Neal (Candace) Heggie. There will be a celebration of her life on Saturday, Oct 27, at 2 p.m. at Holy Trinity Lutheran Church, 581 N 700 E, Logan, UT 84321. In lieu of flowers, memorial donations can be sent in her name to the Cache Humane Society, Holy Trinity Lutheran Church, and the Terrace Foundation. Service under the direction of Cache Valley Mortuary 435-787-8514

Born to Leslie and Rose Ratkay in South Bend, Indiana, Deanne was the oldest sister to Patricia and Susan. After graduation from St Mary&#8217;s Academy, she went on to work in a dress shop and cared for her two grandmothers, with whom she spoke... View Obituary & Service Information

The family of Deanne M. Mauch created this Life Tributes page to make it easy to share your memories.