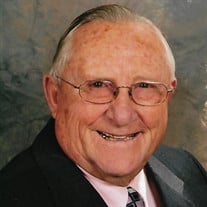 On October 26, 1930 on a Sunday morning, our Father, Dean LeRoy McBride was born to Henry LeRoy & Annie Green McBride in Dayton Idaho. He was the 5th of 6 children and the 1st boy. Needless to say, he was spoiled by his three older sisters. The spring before Dad was born, his sister Ruth, died in a runaway horse and buggy accident. She was only 8 years old. Dad’s Family owned a 72 acre farm in Idaho and he spent the first 10 years of his life growing up and learning the value of work. He spent many hours riding and exploring the mountains while herding the cattle. When Dad was about 10 years old, the family moved to Logan. Like many young boys, he had a paper route. While attending Logan High, he was on the Varsity Wrestling Team. His Family moved again, this time to Hyrum and he participated on the Varsity Track Team at South Cache High School. He graduated in May of 1948. After Dad graduated from High School, he was introduced to the Love of his Life, our Mother, Glenda Lloyd Walker of Wellsville. In October of 1950, he attended a Stake Conference and the visiting General Authority was Spencer W Kimball. He hand delivered his Mission Papers to him and Bro. Kimball interviewed him for a mission at this time. A month later, he received a letter from Pres. George Albert Smith containing his call to the “Northwestern States Mission”. This Mission covered Washington, Oregon and part of Idaho & Montana. On December 13, 1950 along with 20 other Missionaries, he boarded a train and left for Oregon. The next 2 years were filled with many great experiences that have influenced his life greatly. Shortly after he returned from his mission, Dean and Glenda were married in the Logan Temple, and became parents to 5 children. Kevin & Claudia McBride (Newton), Cindy & Kirk Farmer (Wellsville), Roxie McBride (Millville), Jill and Richard Kelly (Island Park, Idaho), Amy & Tim Kohler (Providence). They have 25 grandchildren, 46 great-grandchildren and 2 great-great-grandchildren. Other than a short time in Oregon, they have spent their life in Logan & North Logan. Dad’s brother Reid McBride is still living. His Parents, Sisters Leona Archibald, Verna Lewis, Melba Palmer, Ruth and a Son-in-law have passed on. Dad has been active in the LDS church all of his life. He spent 12 years as an officiator in the Logan LDS Temple, which he enjoyed tremendously. After losing his wife of 58 years, it became necessary to downsize. He eventually relocated to Cache Valley Assisted Living, where he lived for 3 years. We thank them for caring for our Father and enriching his life. A viewing will be held on Thursday, Jan. 16 from 6-8 at Cache Valley Mortuary and on Friday, from 10:00-11:30 at No. Logan LDS 7th Ward building @ 1850 North 400 East. There will be no Funeral Service held. A private family memorial will follow the viewing. Thanks for being a great example to us DAD!

On October 26, 1930 on a Sunday morning, our Father, Dean LeRoy McBride was born to Henry LeRoy & Annie Green McBride in Dayton Idaho. He was the 5th of 6 children and the 1st boy. Needless to say, he was spoiled by his three older sisters.... View Obituary & Service Information

The family of Dean LeRoy McBride created this Life Tributes page to make it easy to share your memories.