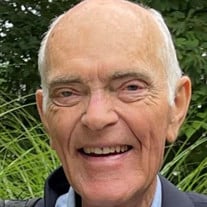 David Peter Dahle 1944 - 2021 David Peter Dahle was born to VaNon Dahle and Arlene Gibbs, the first of their six children, on January 17, 1944.  He grew up in Clarkston Utah and attended Cache High School and Utah State University.  He married Jolene Furness on July 14, 1972 in the Idaho Falls Temple.  David and Jolene are the parents of four children: Tonya (Eric) Van Dyke, Craig (Beth) Dahle, Adreanne (Shawn) Paydar, and Michael (Angela) Dahle, and have 15 grandchildren.  He died at the age of 77 on December 21, 2021, surrounded by his immediate family. Dave lived a life of dedication, hard work, and service. He obtained his Bachelor’s degree in Civil Engineering from Utah State University, serving on the USU Engineering board for several years. He was a devoted Aggie sports fan, avidly following their progress in all sports and ensuring his family was kept up to date. He put his engineering degree to work first at Thiokol, initially working on the space boosters for the space shuttle, and then transitioning to be one of the pioneers of the airbag industry, dedicating 30 years to the development of automotive safety products. He retired from Autoliv in 2005 after working for the company (under various names) for 36 years. Dave was dedicated to his faith and was a consistent servant in the Church of Jesus Christ of Latter Day Saints. He served three full-time missions, one as a young man in Brazil, and two with his wife, to Brazil and the Boston Temple. They also served a service mission on Temple Square for 5 years. He served in many callings throughout his life, including as a Bishop, a Bishopric Counselor, High Counselor, but his all-time favorite was Nursery Leader. Dave’s hobbies included gardening, listening to music, fishing, off-roading in his jeep, following Utah sports, and traveling. He was fortunate to see much of the world and was infamous for his many, long road trips, a few of which were harrowing. Dave was a true gentleman, loved and admired by all who knew and associated with him.  He was always a source of encouragement and an influence for good. He loved helping people in any capacity. Without fail, he was willing and able to take on a task, an errand, or a project. In his genteel, kind, and mild-mannered approach he would go out of his way to help family, friends and neighbors, putting their needs ahead of his own. His family remained his first priority throughout his life. He was a devoted husband of 49 years, recognizing that marriage takes effort through good times and bad. Dave retained his chivalrous habit of opening the car door for his wife for the duration of their marriage. He was a driving force behind family gatherings and reunions, generously devoting time and resources to ensure all the children were welcomed and comfortable. His persistent interest in his children and grandchildren was always appreciated and his weekly calls and trips to visit children will be greatly missed. Dave was preceded in death by his parents. Funeral services will be held at 11:00 A.M. on Tuesday, December 28, 2021 at the North Ogden 16th Ward Chapel of the Church of Jesus Christ of Latter-day Saints, located at 205 E. Elberta Dr., North Ogden, Utah.   Friends may visit with the family prior to the service from 9:30 – 10:45am. A Celebration of Life Open House will also be held on Monday, December 27th from 7 – 8pm at the Garden Park 1st Ward building at 11632 S. Night Heron Road, South Jordan, Utah. He will be laid to rest at the Ben Lomond Cemetery, 2850 North Street, North Ogden, Utah. Those who wish to join the funeral remotely may use the following link: https://us02web.zoom.us/j/85993125977?pwd=eDkwa0VCQmltMUx1a3gwTnE2eDRtZz09 In lieu of flowers donations can be made at this link https://arci.org/ password: Dahle

David Peter Dahle 1944 - 2021 David Peter Dahle was born to VaNon Dahle and Arlene Gibbs, the first of their six children, on January 17, 1944.  He grew up in Clarkston Utah and attended Cache High School and Utah State University.  He married... View Obituary & Service Information