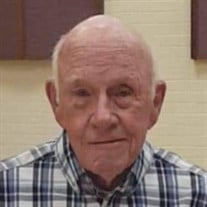 Clifford Louis Cobia, 87, of Providence, Utah, peacefully passed away November 5, 2019, after several years with dementia. He was born in Pocatello, Idaho, on July 3, 1932, with his twin brother Claude to Benjamin and Christine Cobia. At age 6 he and Claude were taken to an orphanage in Boise, Idaho, where they lived for six years. He then lived with his father in Idaho, Arizona and South Carolina. Cliff joined the Air Force during the Korean War. He served in France and northern Africa. He was very proud to serve his country. After his service he was then employed at Hill Air Force Base when he met and married June Singleton in 1966. They had 3 children; Joel, Michelle, and Jared. He enjoyed taking his children on fishing trips. They were later divorced. In 1988 he married Lois Stott and moved to Providence. He worked at Utah State University until he retired again at the age of 80. He loved to work and considered it his hobby. He took great pride in work and often went above and beyond his responsibilities. It was not uncommon for him to be found working on holidays and after hours to assure the facility was clean. Other hobbies included fishing and volunteering at scout camps, especially Camp Loll in Wyoming. As a member of the Church of Jesus Christ of Latter Day Saints, he was given the calling to lock the church which he did for 20 years. During that time he enjoyed playing basketball with anyone who happened to be playing when the church needed to be locked. He enjoyed helping his neighbors and spent 3 years taking care of a neighbor’s yard while they served a mission. He is survived by his wife, Lois. His children Joel (Tanna) Cobia, Magna and Michelle (Will Campbell) Peterson, Salinas, California. He is also survived by his step children: Kimberly (Gary) Earl, Hyde Park; Gregory (Amanda) Stott, Nibley; Matthew (Becca) Stott, Wellsville; Gary (Becky) Stott, St. George; Kevin (Angie) Stott, Hyrum; Amanda (Adam) Moser, Germany. He has many grandchildren and great grandchildren. He is proceeded in death by his parents, his son Jared, and his siblings Grady, Ruby, Harold, Ronald, and his twin brother Claude. Funeral services will be held Saturday, November 9 at 11:00 a.m. in the Providence 5th ward chapel at 355 Canyon Road, Providence. There will be a viewing prior to the service from 9:30-10:30. Interment will be at the Providence cemetery. We would like to express our heartfelt gratitude to Cache Valley Assisted Living; Legacy Hospice for the care and kindness given to Cliff and the family; and Cache Valley Mortuary for going above and beyond in their services to our family. Memories or condolences may be shared with the family on this website.

Clifford Louis Cobia, 87, of Providence, Utah, peacefully passed away November 5, 2019, after several years with dementia. He was born in Pocatello, Idaho, on July 3, 1932, with his twin brother Claude to Benjamin and Christine Cobia. At... View Obituary & Service Information

The family of Clifford Louis Cobia created this Life Tributes page to make it easy to share your memories.