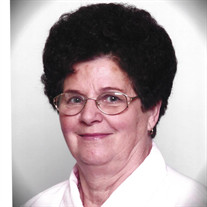 Cleo Seamons was born July 7, 1938 to Henry S. Seamons and Ellen M. Robbins. She passed from this earthly home May 26, 2020 at Quail Meadows Assisted Living Center in North Ogden after sustaining injury’s in an Olympic Vaulting Accident. Cleo was the second of four children and enjoyed the close relationship she had with her siblings growing up. Especially her loving older sister Marjorie. She married Ed Henry Godfrey June 15, 1954 and they made their home in Clarkston Utah. To this union she was blessed with five children. Vickie, Russell, Jerry, Cindy and Ed. Ed was taken from her in an automobile accident in 1963 two weeks before their last son Ed was born. Mom was a smokin hot chick! Along with a couple of her friends, they were known to all the young lads in Clarkston as the hottest in of all Cache Valley. It was this beauty and presence that caught the attention of the true love of her life and soul mate, Richard H Fleming. After a whirlwind romance he whisked her away to Las Vegas to be Married on December 28, 1966 and moved to their home in Pleasant View, Utah. Mom and Dad added two more children to the family with the birth of Angela in 1970 and Jeff in 1973. Mom was a homemaker, farmer, chorister, cook, seamstress, quilter and above all mother and support to her children, grandchildren and the many others she accumulated during her life. She was always generous and loving to us. She truly enjoyed her time with her sheep, goats and chickens and sharing them with the kids at school and in recent years was so thankful to have her friend Susan and her two dear children Craig and Christin come to help with chores and bring her Sunday dinner. Mom was a dedicated member of The Church of Jesus Christ of Latter Day Saints and served in many callings throughout her life. Special to her were jobs as ward chorister, primary teacher and primary secretary. She loved going to the temple with her friend Lael each week to enjoy the spirit and closeness. The highlight of her time in the temple was to be sealed to Richard on June 1, 2017. Cleo is survived by her brother Garold (Lana), children Vickie (Terence) Wilkins, Jerry (Beverly) Godfrey, Cindy Godfrey, Jeffrey Fleming, adopted son Paul Dahle, fourteen grandchildren and five great grand children She was preceded in death by her parents, husband Richard, sister Marjorie, bother Don, sons Russell and Ed, daughter Angela, grand children Paul Richard Dahle and Stephen Henry Godfrey. We want to thank Jeff Vining and all the wonderful staff at Quail Meadow Assisted living for all the loving care and attention given to mom this past nine months. Funeral arrangements are under the direction of Cache Valley Mortuary, a viewing will be held on May 31, 2020 from 6:00 to 8:00 p.m. at Cache Valley Mortuary. Located at 80 W 4200 N in Hyde Park, Utah 84318. Graveside Services will be held on June 1, 2020 at 11:00 a.m. in the Ben Lomond Cemetery 526 E 2850 North Ogden, Utah 84414. In Lieu of flowers may we request donations be made to the LDS Missionary Fund.

The family of Cleo Seamons Fleming created this Life Tributes page to make it easy to share your memories.