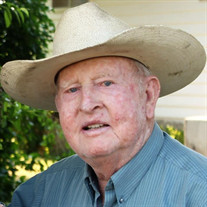 Charles (Charlie) LaFaun Johnson, 85, passed away April 24, 2018, in Preston Idaho. On September 2, 1932 Charlie was born in a log cabin in Cleveland, Idaho. He was the son of George L. and Anna Mary Roholt Johnson. When Charlie and his older brother Cliff were small children, their mother passed away. Their father married Anna’s sister Ora Ann who fulfilled the role of mother in every way. Over time, sisters Madge and Lou, and brother Jack made the family complete. Charlie was raised on Stock Valley Ranch in Treasureton, Idaho which was homesteaded by his Grandfather in the 1890. Charlie loved Stock Valley –he was a part of the ranch and the ranch was a part of him. The majority of his time was spent working on the ranch with his father and brother Cliff. They were not only working partners but the best of friends. On the ranch, Charlie developed a love for nature, particularly the wild game that roamed on and near the ranch. Charlie graduated from Preston High School in 1950. Charlie married his first love, Diane Jorgensen, in the Logan LDS temple on June 30, 1954. Charlie was a loving and dedicated husband and a devoted father to their five children. He loved babies and was excited about each new grandchild and great grandchild. Charlie was a member of the LDS Church, and any position he was called to do he accepted and was always consistent and dependable in fulfilling his responsibilities. He set a good example. Charlie lived his time with enthusiasm. He also had a appreciation for hunting rifles, fast cars, and motorcycles. He loved family outings, going to Yellowstone, day trips to Jackson WY, Downata Hot Springs, Preston’s Rodeo days, going out to eat, church ball games, playing cards, beautiful scenery, watching nature, historical movies and books, homemade ice cream, hunting and fishing with friends, and holding & watching grandkids. Some of his most cherished memories were of sitting around a table or fire visiting, joking, laughing and bonding with friends and family. Charlie also cherished visiting with outdoorsman who visited the ranch. He had a great sense of humor and loved good-natured teasing and joking around. Charlie is survived by his wife Diane, children Denise (Rob) Sarsorito, Laura, Rodney (Heidi), and Clyde (Sandy), 18 grandchildren, and 16 great grandchildren, sisters Madge Porter and Lou (Gary) Blanchard, sisters-in-law Alice Johnson and Cassandra Johnson, and many nieces and nephews. He was preceded in death by his parents, son Wesley, a grandson, a great granddaughter, brothers Cliff Johnson and Jack Johnson; and brother-in-law Larry Porter. Viewings for friends and relatives will be held at the Riverdale LDS meeting house, 3562 North 1600 East, Preston, Idaho on Friday, May 4, from 6-8pm and Saturday May 5 from 9:30-10:30am. The funeral service will follow at 11:00 . Interment will be at the Treasureton cemetery. Flowers and condolences to Cache Valley Mortuary. 80 West 4200 North, Hyde Park, UT, 84318. 435-787-8514. [email protected]" title="Click to open in a new window or tab" target="_blank" rel="nofollow noopener">[email protected]

Charles (Charlie) LaFaun Johnson, 85, passed away April 24, 2018, in Preston Idaho. On September 2, 1932 Charlie was born in a log cabin in Cleveland, Idaho. He was the son of George L. and Anna Mary Roholt Johnson. When Charlie and his older... View Obituary & Service Information

The family of Charles L. Johnson created this Life Tributes page to make it easy to share your memories.