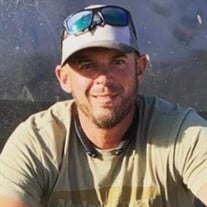 While Casey’s earthly existence ended without warning, all who loved him find peace in knowing he is reunited with his beloved brother, Kiley and dad, Jim. Casey was born February 19, 1979, to James Harmon Drysdale and Becky Blackhurst Drysdale. This sweet little soul came home to two very energetic, loving, excited big brothers. Both these brothers, and one more younger, bonded through wrestling, rough housing, playing together all day and a love that will last through eternity. Somehow, if there was ever a disagreement or a fight, Casey was in the middle. In fact, the family adopted a saying of, “Oh, that’s just Casey!” If you were to ask Casey’s mom, Becky, she would tell you, “Yup, Casey was always just a little bit naughty, and very persistent.” Casey had no fear; he was a daredevil. He went to the emergency room A LOT. There was one year when he had to go to the emergency room about every month. However, he would be right back up and at it as soon as he got home. He had massive determination. This massive determination worked fabulously for him in his adult life. Casey decided young that he wanted to start his own business. He did his homework and picked anyone and everyone’s brains to gain knowledge. He could build or fix anything. He grabbed one of his brothers and they succeeded in building an amazing structural steel business. He married Jill Jorgensen January 28, 2000. From this union three sons were born, Hunter, Dax, and Tad. These three boys were the light of his life. He adored them. The marriage ended in 2012, so then when Casey had his sons, he became all things to everyone, including taking care of his “little” baby Tad. He taught all his children to work hard and gave them opportunities to make things and learn and grow. He met the love of his life, Jamie Howard Dattage, in early 2013 and they were married on July 23, 2018. With this marriage, Casey gained two more children, Kendal and Kyson. Like everything else Casey did, he was a fabulous stepdad and husband. His wife, Jamie, absolutely adores him. Casey was quite stubborn, which most of the time worked well for him. Most times for him it was his way or NO WAY. He was an avid hunter, and he applied this stubbornness to hunting. He loved the game and thrill of the hunt, and bred this same love in his son, Hunter. Casey and Dax had a great time being silly together. Dax has a talent for doing impersonations, and always has everyone laughing. We are all going to miss this HUGE presence in our lives. He was always the life of the party and to all the nieces and nephews, he was their favorite. Casey has so many friends, we can’t count them. How can we endure and go on without you, Casey? Our hearts are broken. He is survived by his wife, Jamie Drysdale, three sons, Hunter, Dax, and Tad and two stepchildren, Kendal and Kyson. Three brothers, Jamey (Nancy) Drysdale, Tyson (Rory) Drysdale, and Daniel (Amy) Murray and three sisters, April (Bill) Hicks, Hilary Murray (Nick Kiely), and Ali Murray; his Father and Mother, Mark and Becky Murray. He was preceded in death by his Dad, Jim Drysdale, sister Elizabeth Murray, and brother Kiley Adam Drysdale. Funeral services will be held Saturday, April 2 at 12pm at the Hyde Park Stake Center, 535 E 200 S Hyde Park, Utah. Viewings will be held Friday, April 1 from 6:00 to 9:00 pm and Saturday from 10:00 to 11:30 am. Burial at Hyde Park Cemetery. Condolences & memories may be shared online at www.cvmortuary.com

While Casey&#8217;s earthly existence ended without warning, all who loved him find peace in knowing he is reunited with his beloved brother, Kiley and dad, Jim. Casey was born February 19, 1979, to James Harmon Drysdale and Becky Blackhurst... View Obituary & Service Information

The family of Casey James Drysdale created this Life Tributes page to make it easy to share your memories.

While Casey’s earthly existence ended without warning, all who...