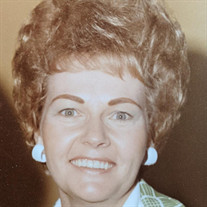 Carolyn Rasmussen Gilbert, wife, mother, grandmother and great grandmother passed away December 24, 2020 in Logan, Utah. She was born June 26, 1937 in Logan, Utah to Niels Edward and Zina Venice Hope Rasmussen. She had three sisters and three brothers. Carolyn grew up in Richmond, Utah and attended Park Elementary, Lewiston Junior High and North Cache High School graduating in 1955. She married Melvin Ray Gilbert of Lewiston, Utah on July 22, 1955 in the Logan Utah LDS Temple. They were married for 65 years and had many adventures together. They made their home in Lewiston until 2008 when they moved to Logan. Carolyn was an active member of The Church of Jesus Christ of Latter-day Saints until her health prevented her from doing so. She served in the Primary and Young Women, both ward and stake, as a secretary for many years. She loved to do genealogy work and was very excited to learn about her ancestors. She took great pride in her family and supporting them in their activities. She enjoyed playing softball in her youth and watching football, basketball and baseball whenever she could. She took great care to grow a beautiful vegetable garden while teaching her daughters all the basics of maintaining a happy home. Carolyn was an excellent cook - she made the best jellos and casseroles and canned all kinds of fruits and vegetables. She made sure that her children learned all of these things in addition to piano, clarinet, coronet, baton, sewing lessons and anything else they desired - she encouraged and supported. She was active in the community serving in the American Legion Auxiliary for many years and had the experience of attending Girls State as a counselor. She also served in the Cache County Dairy Wives. She is survived by her husband Ray, her son Todd Ray (Alice) of Rexburg, Idaho, her daughters Cindy Lee (Val) Gunnell of Richmond, Utah and Trudy Ann (Brad) Seamons of Hyde Park, Utah and 13 grandchildren and 37 great-grandchildren. She is also survived by her brother Darwin Rasmussen. She was preceded in death by her parents, her older sister Virginia Murray, her older brothers Edward Rasmussen and Philo Rasmussen, her younger sister Eva Gene Munk, baby sister Darlene Rasmussen and great granddaughter Maliya Jade Gunnell.

The family of Carolyn R. Gilbert created this Life Tributes page to make it easy to share your memories.