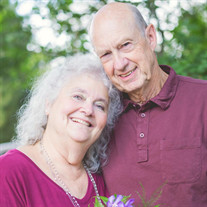 Carol Lynne Cowles Gabrish December 5, 1948- November 22, 2021 Carol Lynne Cowles Gabrish, known as Lynne to all her friends and family, passed from this life on November 22, 2021 due to the ravages of Covid-19, just 2 weeks shy of her 73rd birthday. Lynne was born December 5, 1948 to Col. Harper Brown Cowles and Clara Lucile Dansie, in Fort Sill, OK. Due to her father's Army career, she lived in various places around the world, including Puerto Rico as a small child and Bangkok, Thailand from 1960-62. Lynne graduated from San Pedro High School in 1967 and from Harbor City Junior College in 1969. She then attended Utah State University where she graduated in 1971 with a bachelor's degree in English and a Library Science minor. It was at the beginning of her time at USU that she met William (Bill) Gabrish while the two of them were trying out for the USU bowling teams. Bill was immediately captivated by Lynne, and according to her, followed her home like a lost puppy. It’s a good thing she likes puppies. Lynne and Bill were married July 31, 1971 in a chapel at Terminal Island Naval Base in Long Beach, CA. They were later sealed in the Ogden, Utah temple on September 30, 1978. Lynne and Bill were blessed with 5 children: Jennifer, Wayne, Brian, Jared, and Jim. Each was very special in their mother's eyes, and Lynne was instrumental in helping them to become the strong people they are today. She was very involved in their lives and enjoyed laughing, loving and enjoying the wonders of this world with them.  Lynne was also very involved in the lives of her grandchildren, loving them and supporting their many activities. She celebrated their triumphs, consoled them in their defeats, and cheered them on in whatever interests and activities they enjoyed.  As a family, Lynne and Bill and the kids enjoyed touring the country to see the sights. Every summer brought a road trip somewhere, from the West Coast to the East Coast, to the southern border and the northern border, and even a memorable trip to Banff, Jasper and Yoho National Parks in Canada. Lynne was always ready for a road trip, especially when the destination was to visit our far-flung families or our scenic national parks. Any destination was fine even if it was to get in the car and follow the road to wherever it led. At home, Lynne enjoyed many activities and hobbies. Lynne and Bill bowled for many years in mixed leagues and participated in local, state and national tournaments. They brought up each of the children to bowl and coached junior bowling leagues for a time. At various times, Lynne also enjoyed clogging, sewing, embroidery, quilting, crocheting, and scrapbooking.  She was always open to new experiences.  She loved a good book and would stay up for hours to finish it. She enjoyed researching family history, especially if it involved a road trip to ancestors homesites or visiting their grave sites. Lynne was an active member of the Church of Jesus Christ of Latter-Day Saints. She had a strong testimony of her Savior Jesus Christ. She lived that testimony by obeying the 2 great commandments, to love God, and to love thy neighbor. She served in various callings in Primary, scouts, and in the Relief Society presidency. She found joy in these opportunities to serve those around her. She especially loved serving the scouts. She was a driving force behind all 4 of her sons achieving the rank of Eagle. She encouraged and mentored many others to do the same. She continued to serve in the new Crossroads of the West Council on the council advancement committee and as Eagle Coordinator for the Old Ephraim District. She easily made friends and expanded her circle of influence as she did so. It can be truly said of Lynne that there were no strangers, only friends she had yet to meet. Lynne is survived by her husband, Bill and their children: daughter Jennifer (Chris) Evans, and sons Wayne (Treva), Brian (Amalia), Jared (Jacqui) and Jim (Heidi), along with 18 grandchildren. She is also survived by her brother, Jim Cowles (Fran) of Aurora, CO and many nieces and nephews. She was preceded in death by her parents and her sister Lucile Cowles Guess. The funeral is under the direction of the Cache Valley Mortuary. A viewing will be held Monday, November 29 from 6-8 pm at the Smithfield 4th ward building at 660 West 200 North, Smithfield, UT. The funeral service will be at the same location on Tuesday, November 30 at 11:00 am, with a viewing from 9:30 -10:30 am. Graveside services will immediately follow at the Smithfield City Cemetery at 300 East Center.

The family of Carol "Lynne" Gabrish created this Life Tributes page to make it easy to share your memories.