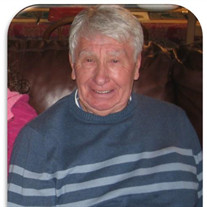 On Wednesday, September 4, 2019, Brigham Maynard Griffin, loving husband, father and grandfather passed away at age 89. Maynard was born on July 16, 1930 in Clarkston, UT to Brigham and Bessie Griffin. He graduated from North Cache High School and attended USU. He made a living owning his own business called Red Carpet Care. On January 28, 1955, he married Virginia Jorgensen Griffin. They raised five sons, Brent, Randy, James, Duane and Owen. Playing baseball was his passion; he was a lefty first baseman and batter. After high school he went to a baseball clinic in Ogden and one of the talent scouts invited him to the Dodger training camp. He later decided to go on a mission and was called to the Northern States Mission. He came back in 1952 and continued to play baseball in the local leagues in Cache Valley until he injured his knee. Maynard was preceded in death by his father, Brigham Maughan Griffin, and his mother, Bessie Fern Griffin. He is survived by his wife Virginia, his five children, Brent (Lori), Randy (Caroline), James (Kathryn), Duane (Heather), and Owen (Sandy); 13 grandchildren and 3 great-grandchildren. A funeral service will be held on Saturday, September 7th, 2019 at the Church of Jesus Christ of Latter-day Saints building on 8950 South 1300 West, West Jordan, Utah, 84088. A viewing will be held that morning at 10:00 AM with the funeral service at 11:00 AM. Funeral Services are under the direction of Cache Valley Mortuary 435-787-8514. Please share a memory at www.cvmortuary.com

The family of Brigham Maynard Griffin created this Life Tributes page to make it easy to share your memories.