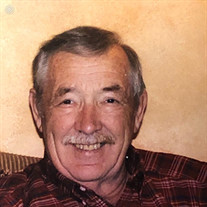 Brent Daugherty passed away among friends and family on January 23rd, 2020 following a lengthy battle with dementia and other health issues.   He was born at home in Smoot, Wyoming on a snowy day on June 8, 1939. He spent his youth in Star Valley, Wyoming and graduated from Star Valley High School.   Following his graduation, he served an LDS mission to Perth and Melbourne Australia. While there, Brent and his fellow missionaries had the opportunity to play the 1956 Australian Olympic team in basketball. Though the missionaries did not win, the domination and athleticism they exhibited against the Olympian’s increased with each telling of the story. He remained an active member throughout his life.   He then attended Ricks College. While there, he accompanied a friend on a trip to Utah State University. There, he was introduced to Kathleen Steele who would eventually become his wife. They were married for over 49 years.   They had two children together: Jeff and Jason. Eventually Brent became a proud grandfather to seven grandchildren. He loved spending time with them.  He traveled great distances to attend their theater performances, 4-H shows, baseball games, county fairs, beauty pageants, soccer games and high school rodeos.   Brent loved heavy equipment.  He spent his early career working for the Wyoming Department of Transportation. He and Kathy moved their family to Hyde Park Utah in 1975. He then worked for many years for Utah Power and Light. Late in his career he began his struggle with health and vision issues and retired as a result.   In his free time he enjoyed coaching softball, baseball, and basketball throughout his life. He could find things in young people that they could not see in themselves. He brought remarkable enthusiasm as an umpire whenever he was given a chance to call a baseball game – he enjoyed making the crowd smile. He also participated in the Antelope Island Bison Round Up for several years – despite being nearly blind. He simply asked that someone point his horse in the direction of the bison.  Brent reasoned that as long as his horse could see, things would “probably be just fine.” It is remarkable of Brent that he would not let his physical challenges limit him.   He loved spending time traveling with his wife and friends. His most cherished memories are of the many road trips with his family and friends.   He was extraordinarily mechanical and could repair anything.  He loved teaching these skills to his kids and valued the time he spent making repairs with them.   He was also passionate about model railroading. He built an incredibly elaborate railroad layout despite his poor eyesight.   While he was soft-hearted and generous, he is best known for his sense of humor.  He derived great joy in the laughter of others. As his disease progressed he never lost his grip on his ability to cause laughter. It was his grit, however, that was his greatest attribute. While he would not have been faulted for surrendering to his many maladies, he consistently found a way to engage them and grind forward . . . with humor.   He is preceded in death by his wife Kathleen, brother Eldren Daugherty, and sisters Joyce Pennock and Judy Dean. He is survived by his sons and their families: Jeff, his wife Debra Daugherty (Jackson, WY) and their children Alexa, Abbigail and Carson as well as his youngest son Jason, his wife Sandy Daugherty (Brigham City, Utah) and their children Trevor, Austin, Kylie and Emily. He is also survived by Sisters Susan Jones and Diane Shaw.   A viewing will be held at the Hyde Park LDS Chapel, 480 N 100 W, Hyde Park on Sunday, January 26 2020, from 6:30 to 8:30 p.m. A viewing will be held prior to the service from 10:00 to 11:00 a.m. at the same address on January 27. The funeral service will follow at 11:30 a.m. Burial will be in the Hyde Park Cemetery. The family wishes to thank his many friends and neighbors who constantly supported and helped Brent and Kathy through their challenges. Additionally, the family wishes to thank his incredibly caring team at Autumn Care and Integrity. He deeply appreciated your care and friendship. The family sends their gratitude to the members of his Ward for their constant support and assistant. Services are under the direction of Cache Valley Mortuary 435-787-8514. Please share a memory of Brent at www.cvmortuary.com.

Brent Daugherty passed away among friends and family on January 23rd, 2020 following a lengthy battle with dementia and other health issues.   He was born at home in Smoot, Wyoming on a snowy day on June 8, 1939. He spent his youth in Star Valley,... View Obituary & Service Information

The family of Brent Daugherty created this Life Tributes page to make it easy to share your memories.

Brent Daugherty passed away among friends and family on January...