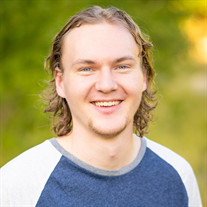 It is with great sorrow that we announce the death of our beloved son and brother, Brad Frands Peterson, age 25. Brad was born in Columbus, Ohio on October 23, 1994. After a long personal struggle, he took his life on November 7, 2019 in Smithfield, Utah. Brad had a curious mind and always loved learning new things. He could be called upon to know a seemingly endless amount of random facts and tidbits of knowledge. As a fine debater, he never lost an argument, probably because he would never give up. He was also quite the movie buff and found opportunities to quote phrases or lines from his favorite films which included Lord of the Rings, Star Wars, Avatar, IP Man, Matilda, Meet the Robinsons and many others. Voice impersonations were one of his specialties. Often his evenings and weekends were spent honing his billiard skills, while benevolently allowing his dad to win or playing video games well into the early morning hours. From a young age, he was fond of Yellowstone trips to look for wildlife. He loved outdoor activities from riding dirt bikes and dune buggy’s or rock crawling in Moab to camping and watching the sky turn a dark crimson while the coals burned out around a campfire. Of course, he also enjoyed starting fires and was a bit of a pyromaniac. In addition, athleticism came naturally to Brad, and even the first time he got on a surf board he conquered the waves. He graduated from Sky View High School with honors, briefly attended Utah State University, and achieved the rank of eagle scout in Boy Scouts. In addition, he enjoyed listening to music from all genres and played the piano and trumpet. Brad was a hard worker, extremely generous, kind, and continually found ways to serve others. At work he was known for bringing in his famous fudge and cookies for his coworkers. While serving in the Washington DC South mission for The Church of Jesus Christ of Latter-Day Saints, he studied hard and became quite the scriptorian. But he also intensely researched other religions and beliefs such as Islam, Hinduism, Agnosticism and Free Masonry. He was profoundly loved by many and will be sorely missed. He is survived by his parents, Eric and Lisa Peterson, his siblings Brent (and Kayla), Bryce (and Vanessa), Karlee, and Brock (and Katie), his grandmother Judy Certain, and many loving uncles, aunts, and cousins. Goodbye, Brad, we’ll miss you until we meet again. In lieu of flowers you can send the family a memory or funny story you shared with Brad.

It is with great sorrow that we announce the death of our beloved son and brother, Brad Frands Peterson, age 25. Brad was born in Columbus, Ohio on October 23, 1994. After a long personal struggle, he took his life on November 7, 2019 in Smithfield,... View Obituary & Service Information

The family of Brad Frands Peterson created this Life Tributes page to make it easy to share your memories.

It is with great sorrow that we announce the death of our beloved...