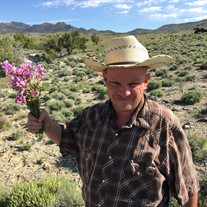 Our beloved Ben returned home on July 17, 2016 following a drowning accident. Ben was the youngest son of Harvey Lynn and Varo Christensen Hutchinson. He was born March 8, 1974 in Murray, Utah. Ben's optimism and attitude were contagious, he was loved by everyone who knew him, and he loved everyone he met. Throughout his life, Ben's uncanny ability to remember names of people, their family members and the cars they drove endeared him to those he knew. He was truly a man without guile. Due to complications prior to his birth, Ben lived with several disabilities, but lived life to the fullest. He earned his Eagle Scout award,participated in the Special Olympics, graduated from Lehi High School, served a full-time mission for the Church of Jesus Christ of Latter Day Saints in the Arizona Phoenix Mission and was a cancer survivor. He married Susan Casselman in the Mount Timpanogos Temple and was a devoted father to their daughter Brianna.Prior to his death, Ben was employed at Thermo-Fischer where he received several awards, for his service and was a beloved colleague. He was active in his local church and volunteered weekly at the Logan, Temple. Ben loved the outdoors and liked camping and animals, although he had mixed success with roosters, achieving YouTube fame on a video entitled “Ben’s Chicken Adventure”. Ben was preceded in death by his brother Thomas Lee Hutchinson. He is survived by his daughter, Brianna Beth; his parents; his siblings, Terry Hutchinson (JeNee); Ted Hutchinson (Cindy); Tom S. Hutchinson; John Hutchinson (Sharon); Ann Fullerton (Baird); Gary Hutchinson; DanHutchinson (Anika); MarciLarkin (Boyd) and numerous nieces and nephews who adored their “Uncle Ben”. He will be missed by all who knew him. A special thanks to Ben's adopted families the Jenks and Mittons in lieu of flowers donations may be made to the Huntsman Cancer Center in Ben’s name.A viewing will be held on Friday, July 22 from 6:00 pm to 8:00 pm at the Logan South Stake Center (344 West 700 South). Funeral services will be at the same location Saturday, July 23 at 11:00 am preceded by a viewing from 9:30 am to 10:30 am. Interment will take place following the funeral services in the Alpine, UT cemetery at 2:30 pm. Funeral Services under the directions of Cache Valley Mortuary 3207 North Main North Logan 435-787-8514.

Our beloved Ben returned home on July 17, 2016 following a drowning accident. Ben was the youngest son of Harvey Lynn and Varo Christensen Hutchinson. He was born March 8, 1974 in Murray, Utah. Ben's optimism and attitude were contagious,... View Obituary & Service Information

The family of Ben Jay Hutchinson created this Life Tributes page to make it easy to share your memories.

Our beloved Ben returned home on July 17, 2016 following a drowning...