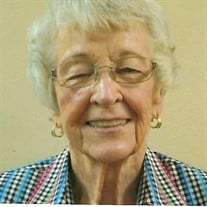 Arlene Traveller Rigby passed away December 15, 2017 at Legacy House in Logan. She was born in Smithfield, Utah on February 17, 1927 to Lester E. and Sidonia Plowman Traveller. She was raised in Smithfield and graduated from North Cache High School in 1945. In the fall of 1943 she first dated J. Murray Rigby of Newton, Utah. They were married on January 30, 1946 in the Logan LDS Temple. They were married for 70 years. For most of their life Newton was home.Arlene spent her energies as a homemaker and supporting Murray in his school, church, and civic responsibilities and on the farm. She took great joy being with friends and family. She was an active and faithful member of the Church of Jesus Christ of Latter Day Saints. One of her favorite experiences was the several years her and Murray served as temple workers in the Logan Temple.She is survived by her children Richard (Chris) Boise, ID, Jeanine (David) Nilson, Fruit Heights, UT, Mark (Diane) Newton, Utah and Randy (Jeannette) Newton, UT, brother in law, Don Shelton, and sister in law, Jeannie Rigby. They have 18 grandchildren, 52 great grandchildren and 1 great great grandchild. She was preceded in death by her parents, her husband Murray, a son Craig,a great grand son Braxton Saunders, a great-grand-daughter Hailey Saunders and sisters Lorraine Snelgrove and Mary Hansen.Funeral services will be held Wednesday, December 20 at 12:00 p.m. in the Newton 1st Ward Chapel, 90 S 100 W, Newton, Utah. A viewing will be held prior to the services 10:00 a.m. – 11:30 a.m. Interment will be at the Newton Cemetery.The family would like to thank all who cared for Arlene and appreciate Legacy House and Hospice. We are also grateful for mother’s kind service and loving support to her family.Services are under the direction of Cache Valley Mortuary, (435)787-8514, 80 West 4200 North Hyde Park. Condolences may be shared online @ www.cvmortuary.com. In lieu of flowers the family suggests that contributions can be made to the Perpetual Education Fund of the LDS Church.

Arlene Traveller Rigby passed away December 15, 2017 at Legacy House in Logan. She was born in Smithfield, Utah on February 17, 1927 to Lester E. and Sidonia Plowman Traveller. She was raised in Smithfield and graduated from North Cache High... View Obituary & Service Information

The family of Arlene T. Rigby created this Life Tributes page to make it easy to share your memories.