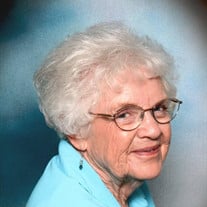 Our Mother, Arlene Gibbs Dahle Moss, age 91, unexpectedly and swiftly passed away on January 16, 2019 at her home in Lehi, Utah with her son, Dennis, at her side. Mom was born to goodly parents, John Robert Gibbs and Rachel Sofia Kloepfer, on December 29, 1927 in Portage, Utah. She was the youngest of 4 daughters and older than 3 younger brothers. The tight knit family, including many uncles, aunts and cousins, lived in Portage. They have remained close throughout the years. At a young age she married VaNon Dahle in Preston, Idaho on August 9, 1942. They lived mostly in Clarkston, Utah and had 6 children, 5 sons and one daughter. Mom experienced many joys in her life including the birth of her first son, David on January 17, 1944, and many trials including VaNon losing his eyesight in an automobile accident in the summer of 1944 when David was about 6 months old. Mom helped in the family businesses of raising turkeys and later chickens and was able to stay at home with her children, which were her pride and joy. Later economic necessity caused her to seek employment outside of the home. She worked at Mode-O-Day, Sunshine Terrace and IRS for many years and developed many lasting friendships. Education was always important to her and over the years she participated in training programs and took night classes. She finally completed the requirements for high school graduation and got her diploma the same year as her son, Paul. VaNon and Arlene were divorced and she later married Don B. Moss on May 25, 1973 in the Logan Temple. She and her youngest son, Dennis, moved to Rockland, Idaho with Don where they farmed. Arlene embraced Don’s 4 children and his grandchildren as her own. They also lived in Fruitland, Utah, Dillon, Montana and Roy, Utah. In 1992 Don and Arlene moved to Lehi, Utah, where they shared a home with her son Dennis and his wife Sheralyn and their family, where she resided until she passed away. During their time in Utah Arlene worked for Wasatch Care and Crossland nursing homes and later for Community Nursing Services , home health care. Arlene really loved the patients she served and always tried to give them the same consideration and care that she showed to family and friends. Don and Arlene were later divorced, but she continued to have close contact with all of her former in-laws, children and grandchildren. They were still her family. She put forth great effort until the day she died to send birthday cards to all of the children, grandchildren and great grandchildren. At first she sent hand written notes/letters with each card until the number of great grandchildren became too large and she had to limit the separate hand written notes. On the day of her death, David received his final card and handwritten letter. Mom was a dedicated member of The Church of Jesus Christ of Latter-saints and served in many callings throughout her life. One of her favorite callings was as a volunteer in the Mount Timpanogos Temple. She was a devoted disciple of our Savior Jesus Christ with a strong testimony of the restored gospel. One significant characteristic was that she gave unconditional love to those with whom she interacted. She was also the common fount of family information that helped to keep the family close. We give special thanks to the many friends, ward members, medical professionals, and others who helped the family provide a situation that allowed Mom to live independently and with dignity. Arlene is survived by: children: David and Jolene Dahle, North Ogden, UT; James and Rayna Dahle, Seymour, TN; Linda and Bill Rose, Garland, UT; Russell Dahle, Salt Lake City; UT; Paul and Jill Dahle, Herriman, UT and Dennis and Sheralyn Dahle, Lehi, UT; Don’s children: Ivan and Coral Moss, Spring City, UT; Donna Moss, Chandler, AZ; and Sherry Edwards, Tempe, AZ; and 90 grandchildren and great grandchildren with more on the way. siblings: JR and Joan Gibbs, Syracuse, UT; Cal and Diane Gibbs, Bountiful, UT; Gloria Gibbs, Delaware; Arlen and Gwen Dahle, River Heights, UT; Joan Larsen, Central Point, OR; Dave Moss, Dillon, MT and Carol Jensen, Brigham City, UT. She was preceded in death by her parents, three sisters, one brother, one step-son, various in-laws and 3 grandchildren Funeral arrangements are under the direction of Cache Valley Mortuary. A viewing will be held on January 25, 2019 from 6:00 to 8:00 p.m. at the Church of Jesus Christ of Latter-day Saints building located at 9681 N 6900 W in Highland, Utah 84003 ( Please note that it is not the most visible building seen from 6800 W, but is the smaller chapel further west in the neighborhood.) The funeral will be held on January 26, 2019 at 11:00 a.m. in the same building and will be preceded by a public viewing from 9:30 to 10:30 a.m. Burial will be in the Portage, UT city cemetery.Funeral Services are under the direction of Cache Valley Mortuary 435-787-851 Share a Memory of Arlene at www.cvmortuary.com

Our Mother, Arlene Gibbs Dahle Moss, age 91, unexpectedly and swiftly passed away on January 16, 2019 at her home in Lehi, Utah with her son, Dennis, at her side. Mom was born to goodly parents, John Robert Gibbs and Rachel Sofia Kloepfer, on... View Obituary & Service Information

The family of Arlene Gibbs Dahle -Moss created this Life Tributes page to make it easy to share your memories.