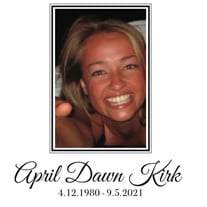 It seems a strange and a sad thing to be writing an obituary for my daughter. How I wish the roles were reversed … but alas. April Dawn Kirk was born at dawn on April 12, 1980, at home in the tiny town of Winnett, Montana, the third child of Lonn and Sharon Kirk. A month later Mount Saint Helens erupted and ash fell on Winnett. However, it was the nationwide recession, and the statewide drought that motivated the move to Utah, first to Hyde Park, then Logan. When April was still two, the family moved to Petersboro. April blossomed and by High School was a real beauty, inside and out, which brought with it a fair share of complications, one being boys, two being boys, and well three… boys! Despite the distractions, April graduated from Mountain Crest High School in 1998 and a short time later joined her older sister Christina as a nanny in Connecticut. Her older brother Joshua was also there working and they had many fun times together. She made many nanny friends and met many boys. After nannying, she continued working in Connecticut, but after a few years decided to come home to Utah and begin getting some higher education. She decided to get her life straightened out, made some major changes and was very happy. She met her prince charming in 2004 and married and before long were joined by April’s only child, Ethen. Even though that marriage ended, Ethen became the light of her life, for the rest of her life. She was an amazing worker, wherever she worked, and was intelligent, innovative and capable. Even as she struggled with her own demons, she was always a strength and bright light to others around her who were struggling. A few years ago she was able to spend several months with her grandmother in Plentywood, Montana. They would sit at the kitchen table for hours and talk and giggle like school girls. Her grandma would tell her all kinds of stories about her childhood and ancestor stories galore. April said she was so grateful for this chance to get to know her grandmother. She was able to record some great ancestor stories which will be cherished. Not long before her passing she had been to rehab, and had hopes and plans for the future and was happier than she had been for some time. As a family, we will miss her generosity, especially to all of the nieces and nephews, her compassion and caring for others, her ability to listen and nurture the hurting. We look forward to a happier day when we shall meet again. She is survived by her son Ethen Hansen of North Logan, her parents Lonn and Sharon Kirk of Petersboro, her brother Joshua and Carrie Kirk of Providence, her sister Christina and Ross McGarvey of Millcreek Utah, her sister Sara and Martin Slott of Plentywood Montana, her brother Gabriel and Alexa Kirk of West Jordan Utah, nieces and nephews Caleb, Cara, Andy, Alice, and Johnny Kirk, Rory and Pierce McGarvey, Betty and Lemmy Slott, Huxton and Anders Kirk and many cousins and friends. She was preceded in death by her grandparents Alice and Cecil Kirk, and Betty and Arnold Lee.

It seems a strange and a sad thing to be writing an obituary for my daughter. How I wish the roles were reversed &#8230; but alas. April Dawn Kirk was born at dawn on April 12, 1980, at home in the tiny town of Winnett, Montana,... View Obituary & Service Information

The family of April Dawn Kirk created this Life Tributes page to make it easy to share your memories.

It seems a strange and a sad thing to be writing an obituary...