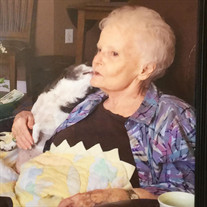 Ann Stevens, at the age of 84, returned to her Heavenly Parents on the morning of Sunday, May 10th 2020. To have been called home on a day such as Mother’s Day was fitting as “Granny Annie” was an exceptional and beloved mother, grandmother and great-grandmother. Ann was born in Wales, Utah January 19, 1936 to Robert and Beulah Rees. Her older siblings still recall how cute she was at birth with her beautiful head of red hair.  The tallest height she reached in her life was 4’10”; she was a sweet but feisty little red head. Amiable and kind while also bold and confident, she possessed a good balance of sweet and sassy. “Even the smallest flowers have the toughest roots.” Granny Annie was certainly an elegant little flower but tough as nails. At the age of 17, Ann married Harry O’Donnell Stevens on August 28th 1953 in the Salt Lake City Temple. Afterwards, she and Don (as he was known) returned to Fillmore, Utah to finish high school. Don eventually worked in the meat business. Later, Ann would become employed as an Albertson’s meat wrapper in Cheyenne, Wyoming with Don as her boss. She was told he would not pay her until she was the fastest meat wrapper in the store. Ann took the challenge and won all the meat wrapping contests there and even won contests at a future job in another store. From her youth into adulthood, Ann was known for her beautiful soprano voice and was often asked to sing at various events throughout her life. In her spare time, Ann was usually found reading historical non-fiction and biographies. She particularly loved reading scripture, American history and historical accounts of events and people that shared her faith. She also loved to paint. She was an avid oil-painter and though she was approached many times by would-be patrons, she never sold any because she knew her posterity would cherish them. Most of her works portray animated scenes of the western frontier and American pioneers. She was a devoted member of the Church of Jesus Christ of Latter-Day Saints and enjoyed working at the Logan Temple in her later years. Ann practiced well the counsel given in Matthew 6:1 to “…do not your alms before men, to be seen of them.” Growing up, Ann’s children witnessed her serve and share of her substance with many but never heard her make mention of it to anyone. Her family later discovered—only through talking with other people—the countless other voluntary, remarkable things she had done for others throughout her life. She was talented, highly intelligent and a charitable disciple of Christ, but never sought recognition or praise. She endured pain in her life, with courage, humility, grace and class. Above all, Ann had an unwavering, sincere love for her God and her posterity. She often said to those she loved, “What’ya good for? Hugs and Kisses!” Those left behind by her look forward to their sweet reunion in that eternal dwelling place on high. Ann is survived by siblings Margo Warner, Dawn Crosland, Orrin Jorgensen and Vicki Haws as well as her 3 children LaAir Stevens, Don Stevens and Dee (Carol) Stevens, 10 grandchildren and 25 great grandchildren. She is preceded in death by her husband H. Don Stevens and granddaughter LaDawn Brown. A private family viewing will be held from 10 a.m. until noon, Friday, May 15, at Cache Valley Mortuary, 80 West 4200 North Hyde Park, UT 84318. A private graveside service will be held at 1 p.m. Friday, May 15, at 310-325 E 100 N, Millville, UT 84326. All services will be held in accordance with state-mandated social distancing practices.

Ann Stevens, at the age of 84, returned to her Heavenly Parents on the morning of Sunday, May 10th 2020. To have been called home on a day such as Mother&#8217;s Day was fitting as &#8220;Granny Annie&#8221; was an exceptional and beloved mother,... View Obituary & Service Information

The family of Ann Rees Stevens created this Life Tributes page to make it easy to share your memories.

Ann Stevens, at the age of 84, returned to her Heavenly Parents...