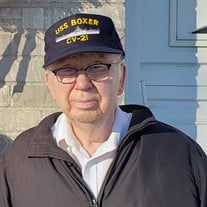 Andrew Max Clark was born June 8, 1926, to Andrew L. and Sarah G. Clark in Clarkston, Utah. He passed away peacefully at his home, surrounded by family, on February 11, 2020. Max married Pearl Lapray in the Logan Temple on September 20, 1951. They are the parents of four children: Jone (Bob) Brown of Smithfield, Utah; Dorothy (Courtney) Nazer of Logan, Utah; Betty (Bob) Mitchell of Eagle, Idaho; and Dean (Janet) Clark of Kaysville, Utah. They have 14 grandchildren and 32 great grandchildren, with 2 more great grandchildren on the way. Max was educated in the Cache County School District and served in the United States Navy for two years. While in the Navy, Max served in the South Pacific during World War II. He then worked at Thiokol Chemical Corporation for 30 years as a lab technician. He also owned and operated a dry farm and served as Justice of the Peace in Clarkston for 16 years. Max was a faithful and active member of The Church of Jesus Christ of Latter Day Saints and served in many callings throughout his life, including his favorite calling as executive secretary. Max served two missions with Pearl: the first in San Diego and the second in St. George, Utah. Max was a gifted musician and loved playing the saxophone. He enjoyed playing for many years in a dance band. Max had many other interests and possessed a very quick wit. He loved everyone he met and enjoyed spending time with his friends and family. Max was preceded in death by his parents, his brother Douglas, and his sister-in-law Ruth Clark. He is survived by his wife, children, grandchildren and great grandchildren, and by his brother Jay and sister-in-law Sharron Clark. There will be a viewing at the LDS church located at 451 S 250 E in Smithfield, Utah on Friday, February 14, 2020 from 6:00 to 8:00 p.m. and on Saturday, February 15, 2020 from 9:30 to 10:30 a.m. Funeral services will be held at the same location on February 15, 2020 at 11:00 a.m.

Andrew Max Clark was born June 8, 1926, to Andrew L. and Sarah G. Clark in Clarkston, Utah. He passed away peacefully at his home, surrounded by family, on February 11, 2020. Max married Pearl Lapray in the Logan Temple on September 20, 1951.... View Obituary & Service Information

The family of Andrew Max Clark created this Life Tributes page to make it easy to share your memories.