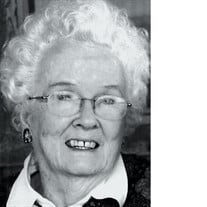 Born Alice Ruby Nelson on January 3, 1916 at her parent’s home on the farm near Perth, North Dakota, the youngest of five children born to Henry Evan & Elina Kjos Nelson. At the age of 2 ½ the family moved to Minnesota to be closer to her father’s parents who were in failing health.This was a Norwegian community and their home language was Norwegian which she spoke until she went to school. She grew up on the farm but her mother shielded her and her sister from the heavier chores like milking the cows. Because she was so petite, her mother kept her home from school an extra year, but when they put her into the nearby country school a year late, the school advanced her two years because she was “too smart”. She started high school at twelve at Lake Park High School and graduated at sixteen. Her mother kept her home for two more years, at which time she entered business college at Fargo, North Dakota. After graduation, she started working for Gambles in Fargo where she worked until WWII broke out, at which time she and a cousin/roommate moved to Seattle WA for hopes of better employment with the war industry. She was employed by Standard Oil as a secretary, and in 1942 met Cecil R. Kirk, whom she eventually married on September 5, 1944. After the war, they settled in Montana, started a family, and in 1951 settled in Cascade, where they raised their three sons. While she preferred being at home during the years she had boys at home, she was also very involved with her husband’s restaurant, and with his two terms as mayor of Cascade. At one time she became a “lady sitter” for the mother of one of the school’s teachers until her mother passed away. She began working part time at Stockmen’s Bank in 1965, but soon became fulltime. In 1971 her husband passed away and in 1975 all three of her sons married. She continued working at the bank until retirement, did some traveling, then came back and worked part-time again at the bank for a number of years. At the age of 90 years, after living in Cascade for 50 years, she moved into a retirement home in Helena, Montana. She made a number of good friends there, but her heart and thoughts were always in Cascade with her friends there who had become like family to her. In March of 2010, because of age and declining health, she moved to Utah, and lived there with her son Lonn and his wife, Sharon until she passed away last week. She was preceded in death by her husband, Cecil, who passed over 43 years ago, her parents and all of her siblings, including in order of death, Elvin, Lloyd, Oliver (and his wife Virginia) and Florence (and her husband Hank). Also a niece, Marilyn.She is survived by her three sons, Douglas (Kathy) of Billings, Lonn (Sharon) of Petersboro, Utah, and Randy (Beverly) of Mulvey Gulch Ranch near Boulder, MT. From them she was blessed with eleven grandchildren and more great grandchildren than I care to try to count. Though Alice was as human as we all are, she will be remembered by most as something of a sweet little angel with an amazing memory for details like phone numbers, zip codes, and birthdays; always sending a carefully picked out card with a beautifully hand-written note and a check to three generations of Kirks.Her immediate family would like to thank those who became her extended family and watched out for her here in Cascade. Bless you all.Services for Alice will be held on Saturday, November 1, 2014 at the Cascade United Methodist Church at 4:00 p.m., a brief graveside service after, followed by food and fellowship for any who would like to visit with the family back at the church after that.

Born Alice Ruby Nelson on January 3, 1916 at her parent&#8217;s home on the farm near Perth, North Dakota, the youngest of five children born to Henry Evan & Elina Kjos Nelson. At the age of 2 ½ the family moved to Minnesota to be closer to... View Obituary & Service Information

The family of Alice Ruby Kirk created this Life Tributes page to make it easy to share your memories.