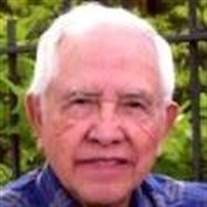 Alfredo Rodas, a loving husband, father, grandfather, great-grandfather and respected congregation Elder, entered earthly rest peacefully, surrounded by his family, Feb. 5, 2018, of a sudden illness.Born in July of 1935 in Santa Lucia, Guatemala, his life spanned nine decades. From his humble beginnings as a boy, orphaned at age 5, he went on to a joy-filled, productive, rewarding and spiritual life. As a young man, he worked as an excellent Western Union motorcycle messenger, later becoming part of a daring motorcycle stunt team that toured Guatemala. Eventually he would find his greatest pride and satisfaction as the patriarch of a loving, successful, Christian family. In 1964, Alfredo immigrated to Joplin, Missouri, followed by his young family a year later. In 1968, the family relocated to Ventura, Calif. His resourcefulness, excellent work ethics and faith led him to successfully build a life in a new culture. He became an electrician and worked at Ventura County Medical Center for 20 years, followed by a stint as a Merchant Marine sailor on the scientific Glomar Challenger. He later established his own handyman business until 2004, when he and his wife relocated to Logan, Utah, enjoying a retirement of service to others and his Creator for 13 years.He will be remembered for the limitless love, sense of humor and adventure, and thinking of others first. He enjoyed sharing his knowledge, both mechanical and spiritual, to anyone in need, if not with his toolbox, with his well-thumbed Bible. A lifelong Christian, he served Jehovah God until his last breath.Alfredo’s seasoned wisdom made him a respected family patriarch who will be dearly missed. Preceded in death by Sara, his loving wife of 60 years, who passed away in May 2017, he is survived by his sons, Ulises (Rosalinda) of San Clemente, Calif., Alfred (Monika) of Burbank, Calif.; daughters, Kerbela “Kerby” Rodas McDonagh (Greg) of Millville, Utah, and Doreen Rodas McColpin (Aaron) of Camarilla, Calif.; nine grandchildren, Sara M. Smith, Austin McDonagh, Marina McColpin Martin, Andrew McColpin, Nathan and Peter Rodas, Matthew, Faith and Frankie Rodas; great-grandchildren, Cove Smith and Rowan McDonagh.The family wishes to express great appreciation to everyone at Cache Valley Hospital, nursing staff and ancillary departments and Dr. Matthew Welter for the excellent care and concern given to our father and the entire family.Alfredo’s family and all who loved him are comforted by the words of John 5:28-29: “Do not be amazed at this, because the hour is coming in which all those in the memorial tombs will hear his voice and come out, those who did good things to a resurrection of life …”A memorial/commemoration will be held Saturday, Feb. 24, 2018, at the Riverwoods Conference Center (Marriott) at 2 p.m. Arrangements by Cache Valley Mortuary.

The family of Alfredo Rodas created this Life Tributes page to make it easy to share your memories.